Higher productivity at the expense of labor

Labor productivity grew 9.5% last quarter. This growth came at the expense of laying off workers massively, and squeezing the current workers who still have their jobs. You can complain but you dare not jump ships as the labor market is still very soft.

High productivity growth is typical at the end of recession and at the beginning of recovery. But because firms cut employees more quickly and aggressively during this recession, current workers feel especially squeezed.

The productivity of U.S. workers surged in the third quarter, as the economy resumed growing even as employers pushed forward with layoffs and cuts in working hours across a wide range of industries. 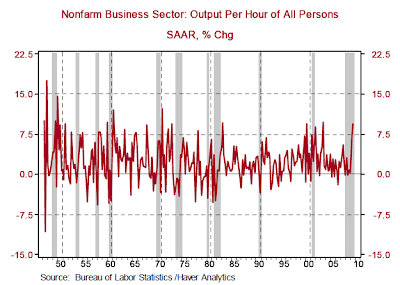 The source of the productivity boom is straightforward. Firms are continuing to cut costs even as the economy heals, meaning they are getting more from existing work forces. Nonfarm output rose at a 4% annual rate in the third quarter while hours worked decreased at a 5% annual rate, the department said.

While unemployment remains high, corporate profits have bounced back from the shock of 2008. If output keeps climbing, employment should follow — and reduce productivity growth from the third quarter’s rate.

Big productivity gains are common at the end of recessions and the beginning of recoveries. The usual pattern is productivity grows first, then employment rises, and finally wages increase.

The productivity gains should prevent an outbreak of inflation even though the Federal Reserve has held short-term interest rates near zero and pumped $1 trillion into the financial system through loans and securities purchases. In normal times, so much monetary stimulus would push consumer prices much higher.

The Labor Department reported that unit labor costs — a measure of what it costs firms to pay workers for a single unit of output they produce — fell at a 5.2% annual rate in the quarter. They are down 3.6% from a year ago, the steepest drop since the Labor Department began keeping records in 1945.

“The combination of rapidly increasing productivity and falling unit labor costs puts downward pressure on inflation, and should make the Fed more comfortable about pursuing accommodative monetary policy amidst economic growth,” J.P. Morgan economists said in a note to clients.

The productivity of workers is a linchpin to an economy’s health and growth potential. The U.S. economy went through a productivity drought in the 1970s and ’80s and a resurgence in the late ’90s. It slowed sharply between 2004 and 2008.

Though the latest jump could be the start of a new upturn, there are reasons to doubt that the latest rebound can be sustained. The financial shock of 2008 could debilitate a key part of the economy — the financial sector. The regulatory reshuffling that the crisis has produced could also sap the productivity of some industries. Moreover, business investment has fallen sharply, which has held back a key driver of productivity growth in the past — business use of new technologies.

Some analysts said businesses might start investing more now. “Faster productivity growth will support profits, and could lead to a more vigorous rebound in capital spending than envisaged,” Jared Franz, an analyst at T.Rowe Price, said in a commentary on the report.

A separate report by the Labor Department suggested that the intensity of layoffs could be waning. The department said new claims for unemployment benefits decreased by 20,000 to 512,000 in the week ended Oct. 31. That is the lowest level since Jan. 3. The previous week’s level was revised to 532,000. These are still high levels but appear to be on a downtrend.

The U.S. employment report for October, out on Friday, is expected to show that the jobless rate stayed close to a 26-year high of 9.8% in September.