Kay Hymowitz, fellow at Manhattan Institute, argues on Wall Street Journal that much of gender wage gap can be explained by the difference of hours worked by men and women.  In other words, men earn more than women because they work longer hours.  This is especially true when a child is born – most women, even the most educated, choose to stay home or work as part-time.

Most people have heard that full-time working American women earn only 77 cents for every dollar earned by men. Yet these numbers don’t take into account the actual number of hours worked. And it turns out that women work fewer hours than men.

The Labor Department defines full-time as 35 hours a week or more, and the “or more” is far more likely to refer to male workers than to female ones. According to the department, almost 55% of workers logging more than 35 hours a week are men. In 2007, 25% of men working full-time jobs had workweeks of 41 or more hours, compared with 14% of female full-time workers. In other words, the famous gender-wage gap is to a considerable degree a gender-hours gap.

The main reason that women spend less time at work than men—and that women are unlikely to be the richer sex—is obvious: children. Today, childless 20-something women do earn more than their male peers. But most are likely to cut back their hours after they have kids, giving men the hours, and income, advantage.

One study by the American Association for University Women looked at women who graduated from college in 1992-93 and found that 23% of those who had become mothers were out of the workforce in 2003; another 17% were working part-time. Fewer than 2% of fathers fell into those categories. Another study, of M.B.A. graduates from Chicago’s Booth School, discovered that only half of women with children were working full-time 10 years after graduation, compared with 95% of men.

Women, in fact, make up two-thirds of America’s part-time workforce. A just-released report from the New York Federal Reserve has even found that “opting-out” by midcareer college-educated wives, especially those with wealthy husbands, has been increasing over the past 20 years. 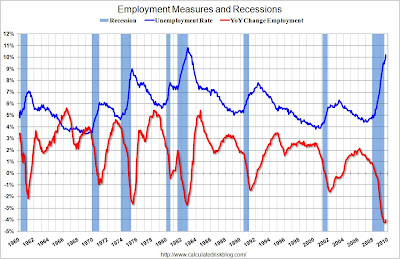 Employment-population ratio dropped to the lowest level since 1983. 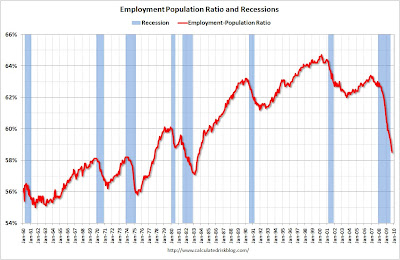 Compared to previous recessions, it looks like we are going to enter a “mother of all jobless recoveries” in this recession. 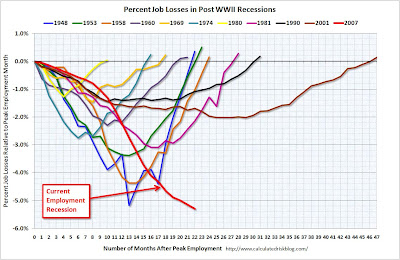 (graphs courtesy of calculatedrisk, as usual)

In terms of prolonged unemployment, we reached the highest level on record. 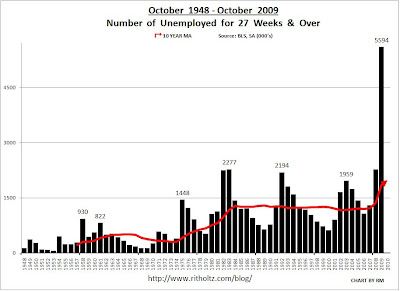 Now listen to Goldman Sachs’ Jan Hatzius on the US job market outlook: