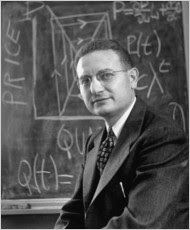 Something about Joe Stiglitz

A brief yet very interesting piece on economist Joe Stigliz (source: IMF). Here are some excerpts:

Realizing Stiglitz’s potential, his professors encouraged him to leave Amherst after his third year and start graduate work elsewhere; they were nevertheless devastated to see him go. “Frankly, seeing Stiglitz leave is like watching the disappearance of one’s right arm,” one of them wrote. The Massachusetts Institute of Technology (MIT), however, was overjoyed to get him as a student. The institution’s admissions committee sent his information to the economics department and asked what the amount of his stipend should be, listing choices ranging from no stipend to $12,000. The professor assessing Stiglitz’s application scribbled on the folder: “Offer him Department Head’s salary.”

In the 1960s, MIT was the center of a revolution in economics. “The department placed mathematics—not philosophy or ideology—at the heart of policy analysis,” says Stiglitz, but it sought to bring about “an interface of careful mathematical models and the practical problems of the economic world.” Stiglitz went on to excel at this work, so much so that MIT made him an offer right away on his graduation. The job came with strings attached, though. Stiglitz had to agree to sleep in an apartment instead of his office—MIT wanted to see a lease as proof that he had an apartment—and to start wearing shoes around the office. MIT was not able to retain Stiglitz for long—over the next two decades his wanderlust took him to Cambridge, Yale, Oxford, Stanford, and Princeton—but MIT was right about his potential. Stiglitz unleashed an intellectual effort that earned him the 1979 John Bates Clark medal—awarded to the most influential U.S. economist under the age of 40—and made him a shoo-in for a Nobel Prize.

In 1993, Stiglitz abandoned his comfortable perch in academia for the rough-and-tumble of the policy world. He became a member of Clinton’s CEA and later its chairman. Alan Blinder, a Princeton professor and a fellow CEA member, describes it as “a gutsy move for a purely academic superstar.” Stiglitz was instrumental in pushing through several initiatives, including persuading a somewhat reluctant U.S. Treasury to issue inflation-indexed government debt. But Chait wrote in The American Prospect that Stiglitz’s style of argument—making his case publicly even after losing internal debates on issues—led to wintry relationships with other presidential advisors, such as Larry Summers. Blinder says politely that “Joe’s behavior . . . might perhaps be considered a little quixotic.”

This style grew even more pronounced after Stiglitz moved in 1997 from the White House to become World Bank chief economist. He was critical of the economic advice to the transition economies to carry out a speedy move to markets and capitalism. Stiglitz favored a much more gradual move, with legal and institutional reforms needed to support a market economy preceding the transition to markets. Kenneth Rogoff, a Harvard professor and former chief economist of the IMF, doubts that Stiglitz’s approach would have succeeded. He says it is “unlikely that market institutions could have been developed in a laboratory setting and without actually starting the messy transition to the market.” Rogoff adds that because the institutions underpinning communism had collapsed, “some new institutions had to be created quickly,” and it is inevitable that mistakes were made in this haste. But “institutions take a long time to nurture and the ones that are there today, however imperfect, might well not be there if the effort had not been started” immediately when communism fell.

During the financial crisis of 1997–98, Stiglitz publicly criticized the programs put together by the IMF and the governments of some Asian countries. Stiglitz argued that raising interest rates to defend the currencies in these countries was counterproductive: the high interest rates reduced confidence in the economy by increasing loan defaults and corporate bankruptcies. Not everyone agreed with Stiglitz. The late MIT economist Rudiger Dornbusch defended the high-interest-rate strategy as essential to restoring confidence, adding that “no finance minister will opt for the Stiglitz Clinic of Alternative Medicine. They [will] have the ambulance rush them to the IMF.” J. Bradford DeLong, a noted macroeconomist at the University of California, Berkeley, wrote that following “Stiglitz’s prescriptions [to] lend more with fewer conditions and have the government print more money to keep interest rates low . . . would have been overwhelmingly likely . . . to end in hyperinflation or in a much larger-scale financial crisis as the falling value of the currency eliminated every firm’s and bank’s ability to repay its hard [foreign] currency debt.”

After exiting the World Bank in 1999, Stiglitz repaired to Columbia University and wrote what became a best-selling book titled Globalization and Its Discontents. Many reviewers of the book noted that its narrative power came from having a clear villain: the IMF. The book’s references to the IMF—almost all critical—totaled 340. Tom Dawson, the IMF’s external relations head at the time, quipped: “That works out to over one alleged mistake committed by the IMF per page. You’d think by sheer accident we’d have gotten a couple of things right.”

Despite the financial crisis, Stiglitz remains optimistic about the future of markets and capitalism. In contrast to “the 19th century owner-operated capitalism, in the 21st century capitalism will be operated by the people,” he says. But to make it a success, people have to be more economically literate and there has to be greater civic participation in economic policymaking. With these goals in mind, Stiglitz founded the Initiative for Policy Dialogue (IPD) in 2000—a global network of economists, political scientists, and policymakers that studies complex economic issues and provides policy alternatives to countries. IPD also conducts workshops to enable the media and civil society to participate effectively in policy circles. Dawson applauded the effort: “It’s a tough business—you almost have to be a Bono to have an impact on policy.”

Indeed, to reach wider audiences, Stiglitz has branched out into film with a documentary called Around the World with Joseph Stiglitz about how the fruits of capitalism can be shared more equally. Will it give filmmaker Michael Moore a run for his money? “No,” laughs Stiglitz, “I think Moore is very effective,” but “frustration doesn’t do any good.”

Unlike Moore, Stiglitz says he hasn’t lost his “Midwestern optimism” that things improve over the long run. Many people, he says, express their dismay to him that, with the financial crisis barely over, the bankers and their boosters seem to be back calling the shots. But if genuine reform of the financial system is not undertaken, “there is a reasonable risk of another crisis within 10–15 years, and the likelihood that the banks will win the next round is lower.” Every crisis provides “an impetus for deeper democratic reform. The game isn’t over.”

Nobel speech by Oliver Williamson. Professor Williamson will be here at Copenhagen Business School on Dec. 15.