Today’s initial unemployment claim came out with a benign number: 365k, well below the historical average required for recession: 375k-400k. So what’s going on? Are we not in recession?

Barry Ritholtz thinks we may need to shift our focus to the continuing claims and he presented a convincing graph to show that we are already in recession.

“Observe the CUIC (continuing unemployment insurance claims), YoY, 4 Week MA:
Every time this has moved above 10%, we have been in a recession. If you want a margin of safety, use 15%. The current reading: 19.5% — is deep into recessionary levels — despite INITIAL CLAIMS being below 400k”. 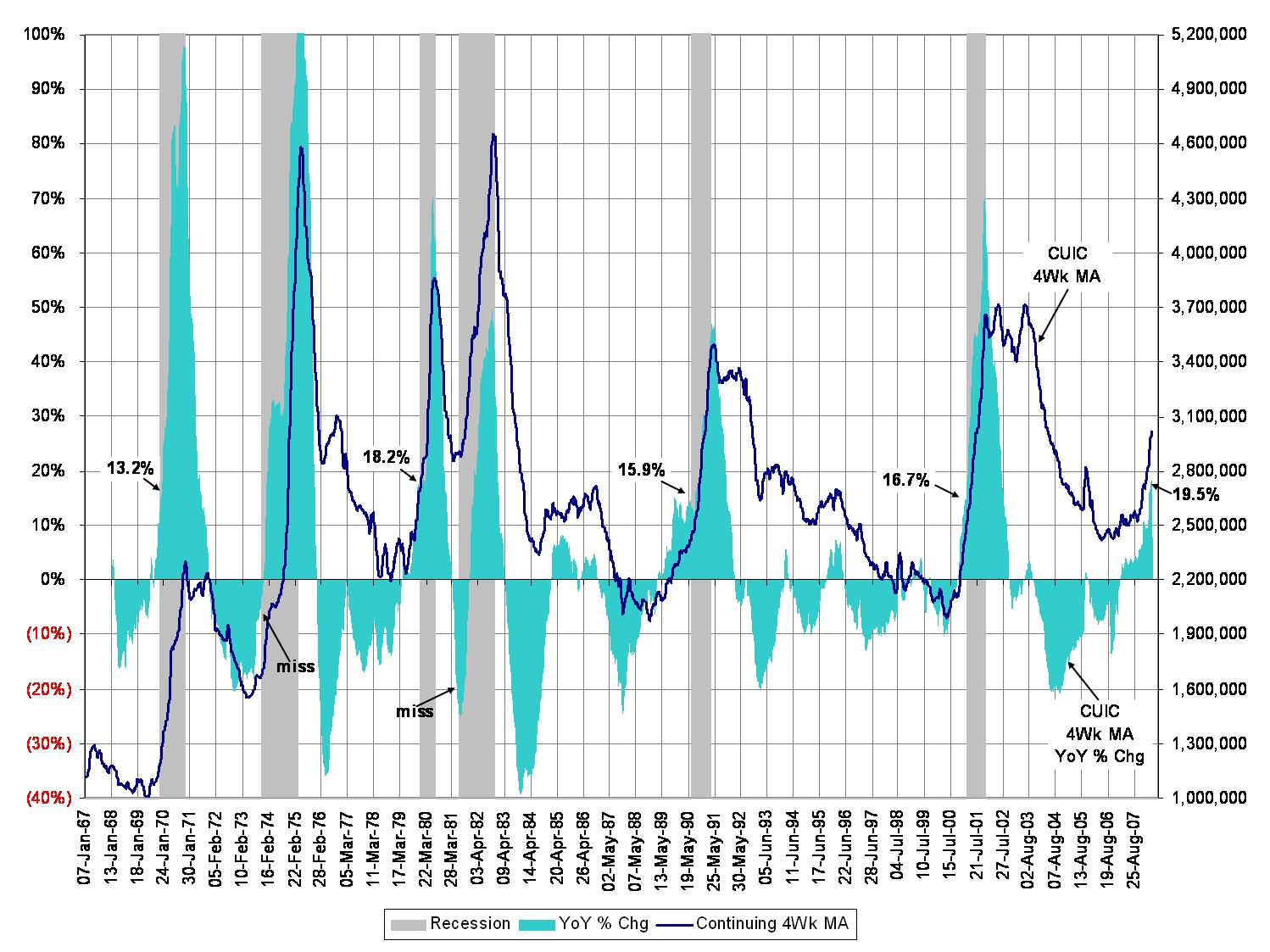 This woman (Emily Oster) stirred the academia with her intriguing finding that attributes China's skewed male-female birth ratio to the high Hepatitis-B rate in China. Now the theory is being invalidated, by herself.

How much is RMB undervalued? A reconsideration

RMB (Chinese Yuan) was estimated by various studies undervalued by over 40%.  But the estimation was based on an obsolete World Bank PPP conversion number in 1980s. Several months ago, World Bank finally got their hands on the issue and revised the PPP number for China.  Now new estimates show RMB is only undervalued by 10%.  Read this analysis here.
What does this imply?
Chinese government finally got their revenge: I told you so, Paulson, we were not manipulating our currency!  The implication for the currency market is this: anyone who expects Yuan's appreciation will go on forever had better change their bet.

One of the key structural forces of inflation in China, as is widely agreed, is the persistent and large rise in its official reserves, roughly half of which have, in recent years, been sterilised. What makes China’s case rather remarkable is that China not only runs a large C/A surplus (which averaged 7.4% of GDP during 2005-07), but it has also received very large capital inflows. Official reserves grew sharply from 2002 (US$286 billion) to 2005 (US$819 billion), but really accelerated in 2007 (reserves increased by US$461 billion). What is perhaps even more remarkable is that, while China’s C/A surplus has continued to expand, the growth (my emphasis) in net capital inflows in 2007 accounted for 59% of the total increase in reserves. To spell this out, China’s massive C/A surplus last year of US$206 billion accounted for ‘only’ 41% of the increase in official reserves. We argue that much of these large capital inflows may have been motivated by the general expectation that the CNY would continue to appreciate against the dollar at a rapid pace, and that having a short USD/CNY exposure was a high-yield zero-risk investment. Thus, rather perversely, while Beijing’s ultimate objective of bringing the value of the CNY more in line with the economic fundamentals should eventually lead to a more sustainable BoP position, the process of getting there is inflationary. In sum, while many have argued that the stronger CNY has helped China to contain inflation, we believe that precisely the opposite is the case.

Theoretically, the only way around this dilemma confronted by China is to have a maxi-revaluation in the CNY against the dollar of a size so large that few investors would believe that the CNY can appreciate further. This is the only effective way to halt the speculative capital inflows into China. The practical obstacle, however, is that it is not clear how big such a move in USD/CNY would have to be. Related to this question are the concepts of the ‘fair value’ and the ‘equilibrium value’ of USD/CNY. The former is the value of USD/CNY that is consistent with the underlying economic fundamentals (e.g., productivity, terms of trade, etc.), while the latter is the value of USD/CNY that will help to close China’s BoP surplus. We believe that the current spot USD/CNY is already close to the ‘fair value’. However, to close China’s BoP surplus, USD/CNY would probably need to decline by a massive (50%?) amount. Would Beijing feel comfortable implementing a step revaluation in CNY from 7.00 to 3.50 in one go? We doubt it.

Jen’s analysis captures largely what is happening in China. I reckon that this could be a plausible explanation of why Chinese government’s inflation-control measures so far have been largely fruitless.
However, there are several issues with his analysis I’d like to point out:
First, he did not differentiate FDI with hot money in the net capital inflows. I suspect a large chunk of the capital inflows would be long-term foreign investment. But arguably, a lot of hot money can also enter under FDI camouflage.

Second, Jen thinks the only solution to the inflation problem is a large one-time currency reevaluation. But there are many other policy possibilities.

1. Tighten up capital control on hot money inflow. This is arguably not the best solution but can be improved at margin.
2. PBoC (China’s central bank) allows an even bigger chunk of $ revenue from export be retained at enterprise level. This reduces the pressure of converting $ to CNY immediately thus will not increase domestic money supply.
3. Relax the regulation on domestic US $ conversion and allow one-way free currency exchange without cap (or with a very generous cap). This is to say, Chinese enterprises and individuals are encouraged to freely exchange US $ with CNY, but US $ is not allowed to be converted to CNY within certain time-frame. Be reminded free conversion does not equal lift of capital control but can be the first step towards it.
4. Finally, if Chinese government is really serious about inflation control, they should raise interest rate to an even higher level. Tweaking with bank reserve requirement is not good enough. Currently the real interest rate in China is negative (with inflation adjusted), and the monetary policy is still expansionary. Administrative control or command orders have been ineffective. Only by increasing cost of capital and disincentivize investment can inflation be controlled.

Berner: muddle-through or darker clouds ahead?

The recent market rally since mid March spurred a lot of discussion on market outlook. Here is another one.  Richard Berner, Chief Economist of Morgan Stanley, discusses market risk and in his view the downside risks outweigh those positives.

Look at below graph first (h/t to wsj article, “You Can’t Soak the Rich“):

I am amazed by the fact that no matter what tax rates are, tax revenue always remains at around 19.5% of GDP (post WWII). Laffer curve would help to explain this mysterious finding: when government increases tax rate, it’s supposed to discourage incentives to work and invest, so GDP shrinks; when government lowers tax rate, the opposite is true and GDP increases. So on average, tax revenue as % of GDP may be quite stable, but I did not expect it’s a fixed number. The 19.5% number is amazing to me.