Will Ben Bernanke be reappointed? Part 2

Following my last piece on the chance of reappointing Bernanke as Fed Chairman, here is an analysis from David Rosenberg (former Chief Economist at Merrill):

Despite the fact that the Fed Chairman has a legion of fans within the economics community given his vast academic credentials, this is still a tough call. The White House and Congress do not seem to be big fans and what investors should realize is that (i) Bernanke was Bush’s man and is a card-carrying Republican; (ii) this is a political appointment, do not make any mistake about that, and (iii) claims that Mr. Bernanke saved the world is a bit misleading because it was his actions (or inactions) while at the Fed as governor 7-8 years ago that contributed to the bubble. Bernanke was a giant cheerleader for the leverage-induced economy during his time as the chief economist at the White House and while he was aggressive (and likely broke every rule in the book of central banking) in getting the credit market and economy back on track, he failed at the outset to realize the severity of the credit collapse and treated it as a liquidity event only for months.

The Fed’s economic forecast that was published just over a year ago for late 2008 and 2009 is an embarrassment, to say the least. Valuable time was lost under his watch and the question is (i) does the Administration look at his entire record as opposed to his period as a White Knight, and (ii) will Mr. B end up being a scapegoat once the economy relapses in the fourth quarter and the unemployment rate makes new post-WWII highs along the way. See the front page of the NYT for more — Bernanke, a Hero to his Own, Still Faces Fire in Washington. The search committee is already out, by the way, and the likes of Blinder, Yellen, Ferguson and Summers are on it.

Australia and China have just signed their largest ever trade deal — a 20-year agreement worth $41.1 billion for Petrochina to import liquefied natural gas from Exxon Mobil's share of the Gorgon gas field down under.

Cue warm words from Australia's energy minister about the health of the trade and investment relationship between the two countries.

The reality is this deal merely papers over the cracks.

The bare bones of the contract between Exxon and Petrochina were hammered out earlier this year, before a marked rise in bad feeling between Australia and China emerged.

So it predates Chinese anger over Chinalco's failed bid to take a major stake in Rio Tinto, for example, and Australian jitters over the arrest of Rio employees in China this summer — including Stern Hu, an Australian citizen.

And because this deal doesn't involve any actual Chinese ownership of Australian assets or companies, it's palatable for the Canberra government.

A rejection or moderation of that deal would reveal how delicate Sino-Australian relations remain. Opposition leader Malcolm Turnbull yesterday said they were at their lowest ebb for many years.

Me. Turnbull, of course, has political motives. He knows that the reputation of Australian prime minister Kevin Rudd — a fluent Mandarin speaker — rests to some extent on his ability to handle relations with China.

Mr. Rudd, an old China hand, will in turn know business with China in future won't be as smooth as this gas deal makes it seem.

We have heard about “January Effect”. How about “September Effect”? Will we have another one this fall? (source: WSJ)

September is fewer than three weeks away. Feeling nervous? Maybe you should be. For investors, the period between Labor Day and Halloween is proving an annual fright show. And no one knows why.

It was, of course, in September last year that Lehman collapsed and everything fell apart. But then it was also September-October 2002 that the last bear market plunged to its lows.

The 1998 financial crisis? It began late August, and rolled on for two months.
The famous crash of 1987 came in October. But most people have forgotten that the market actually started sliding downhill in late August.

That’s almost exactly what happened in 1929 too. The big crash came in October, but the market peaked just after Labor Day. Prices began falling through September, then tumbled further still.

The worst month of the Depression? September, 1931, when the Dow fell about 30 percent. It was also in September, 2000, that the bear market really got going.
The 9/11 crisis, of course, came in September. That was hardly caused by investors. But what is forgotten is that the stock market was already looking wobbly. In the two weeks before the terrorist attacks, the Standard & Poor’s 500-stock index fell 7 percent.

So is there really a September, or a Halloween, effect?

Other research takes the idea of an autumn dip even further. Georgia Tech doctoral student Hyung-Suk Choi studied the so-called “September effect” as part of his recent Ph.D. thesis. (Read the research here) He looked at data for 18 developed stock markets around the world spanning up to 200 years, and found that in 15 of those markets, September brought red ink for investors.

Fund manager Sven Bouman and finance professor Ben Jacobsen concluded that investors in most world markets have historically fared poorly from May through October each year. They made their money between November and April. (Read the research here.)

Hence the old British investors’ saying, “sell in May and go away, don’t come back till St Leger Day.” (But since St. Leger Day is in the middle of September, even that date may be premature.)

Some of the September or Halloween effect is caused by a few really bad years. But that’s not the whole story. To reduce the influence of outliers I looked instead at the median result since 1926 instead of the statistical mean. The performance gap between September and the other months shrank from 2 percent to 1.4 percent. That’s smaller, but it’s still a difference. The median September saw losses of just 0.07 percent. But the median month for the rest of the year gained 1.37 percent.
As for the causes of a possible September effect, most are stumped.
“There haven’t been any good academic stories to explain it,” admits Michael Cooper, finance professor at the University of Utah’s David Eccles School of Business. “One credible explanation is just luck.”

It’s been suggested that mutual funds drive down the market by selling their losing stocks before their October 31 year end. Or that third quarter profit warnings come in early September, raising fears about full-year results. Or that these autumn crashes used to be related to the harvest, as Midwestern banks withdrew capital from New York.

(Still another theory cites seasonal affective disorder. Investors simply get more risk-averse, and more prone to sell, as the days get shorter. That’s the case argued by York University finance professor Mark Kamstra and others. (Read the research here.))

So what, if anything, should you do?

In practical terms, maybe not that much. For most people, even a performance difference of one or two percentage points isn’t going to cover the transaction costs of selling before the end of August and re-entering the market a month later. And stock market patterns aren’t ironclad. The market may even jump in September, as it did in 2006 and 2007.

Perhaps the best you can do is brace for turmoil.

China’s banking system and the current state of the economy through the eyes of Jing Ulrich, Chairman of China Equities, JP Morgan Chase.

Another Abby Cohen interview. She is Sr. investment strategist at Goldman Sachs. Her comments are always crystal clear. 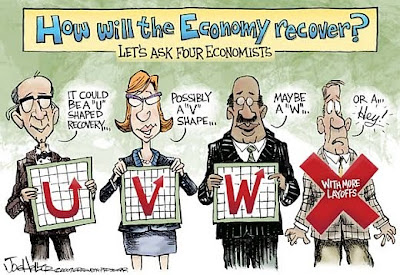 Should Ben Bernanke be reappointed?