Becker: U.S. should not ask China to appreciate its currency

Gary Becker analyzes why he thinks China's currency policy does more good than harm to the US:

By all accounts, President Obama's visit to China last week was pretty much a failure on all the major issues, which include China's contributions to climate change, nuclear weapons, and various aspects of the world economy. I will concentrate my discussion on two of the most important and closely related economic issues: the valuation of the Chinese currency, the renminbi, and the huge assets accumulated by China that are mainly held in the form of US Treasury bills and other US government assets.

The Chinese central bank held the value of the renminbi fixed relative to the US dollar at a little over 8 renminbi per dollar during the 1990s, and until 2005. It then allowed the renminbi to appreciate gradually to less than 7 per dollar until 2008, when it again fixed the rate of exchange between these currencies at about 6.9 renminbi per dollar. This exchange rate is considerably above a free market rate that would be determined in a regime of flexible exchange rates. So there is no doubt that China is intentionally holding the value of its currency below the rate that would equate supply and demand.

President Obama apparently complained to Hu Jintao, President of the People's Republic of China, about the low value of the renminbi, and urged China to allow it to appreciate substantially. The US and other countries worry that the undervaluation of the Chinese currencyi increases the demand for Chinese exports, and reduces China's demand for imports from countries like the US because China keeps the dollar and the currencies of other countries artificially expensive relative to their currency. America and other countries hope that greater demand from China for their exports resulting from a higher value of the renminbi will help these countries resume sizable economic growth as they recover from this severe recession. They especially want to help reduce the high levels of unemployment found in many of these nations.

Indeed, in good part due to the low value of its currency, China has run substantial surpluses on its current trade account as it imports fewer goods and services than it exports. The result is that China has accumulated enormous reserves of assets in foreign currencies, especially in the form of US government assets denominated in dollars. As of September of this year, China had the incredible sum of over 2 trillion dollars in foreign currency reserves, such as US Treasury bills. This is by far the highest reserve in the world, and it amounts to the enormous ratio of more than one quarter of China's GDP of about $8 trillion (purchasing power parity adjusted).

I am dubious about the wisdom of both America's complaints about China's currency policy and of China's responses. On the whole, I believe that most Americans benefit rather than are hurt by China's long standing policy of keeping the renminbi at an artificially low exchange value. For that policy makes the various goods imported from China, such as clothing, furniture, and small electronic devices, much cheaper than they would be if China allowed its currency to appreciate substantially in value. The main beneficiaries of this policy are the poor and lower middle class Americans and those elsewhere who buy Chinese made goods at remarkably cheap prices in stores like Wal-Mart's that cater to families who are cost conscious.

To be sure, US companies that would like to export more to China are hurt by the maintenance of the Chinese currency at an artificially low value relative to the dollar. As a result, employment by these companies is lower than it would be, so that this may contribute a little to the high rate of US unemployment. But I believe the benefits to American consumers far outweigh any loses in jobs, particularly as the US economy continues its recovery, and unemployment rates come back to more normal levels.

Since the opposite effects hold for China, I cannot justify their policies from the viewpoint of their interests. Their consumers and importers are hurt because the cost of foreign goods to them is kept artificially high. Their exporters gain, but as in the US, that gain is likely to be considerably smaller than the negative effects on the wellbeing of the average Chinese family.

I reach similar conclusions about China's accumulation of their excessive reserves. The US has little to complain if China wants to hold such high levels of low interest-bearing US government assets in exchange for selling goods cheaply to the US and other countries. China's willingness to save so much reduces the need for Americans and others to save more, but is not differences in savings rates also part of the international specialization that global markets encourage? To be sure, why China is willing to do this is difficult to understand since they are giving away goods made with hard work and capital for paper assets that carry little returns.

One common answer is that China hopes to increase its influence over economic and geo-political policies by holding so many foreign assets. Yet it seems to me just the opposite is true, that China's huge levels of foreign assets puts China more at the mercy of US and other policies than visa versa. China can threaten to sell large quantities of its US Treasury bills and other US assets, but what will they buy instead? Presumably, they would buy EU or Japanese government bills and bonds. That will put a little upward pressure on interest rates on US governments, but to a considerable extent, the main effect in our integrated world capital market is that sellers to China of euro and yen denominated assets would then hold the US Treasuries sold by China.

On the other hand, the US can threaten to inflate away some of the real value of its dollar denominated assets-not an empty threat because of the large US government fiscal deficits, and the sizable growth in US bank excess reserves. Inflation would lower the exchange value of the dollar, and also of the renminbi, as long as China keeps it tied to the dollar. That would further increase the current account surpluses of China, and thereby induce China to hold more US and other foreign assets, not a very attractive scenario to China.

So my conclusion is that the US in its own interest should not be urging China to appreciate its currency- countries like India have a much greater potential gain from such an appreciation. On the other hand, I see very little sense at this stage of China's development in maintaining a very low value of its currency, and accumulating large quantities of reserves. Paradoxically, President Obama and President Jintao should each have been arguing the others positions on these economic issues.

A classic bubble is forming in China. Prick it, or deal with it after burst?

A large bubble is forming in China’s property market as a result of Beijing’s credit-driven stimulus programme, one of the country’s most prominent real estate developers warned.

Zhang Xin, chief executive of Soho China, one of the country’s most successful privately owned property developers, told the Financial Times the asset bubble was leading to rampant wasteful investment in the sector, undermining the country’s long-term growth prospects.

“Real estate prices should only go up because people want to actually use the space, but at the moment we can see more and more empty buildings across the whole country and in every real estate segment,” Ms Zhang said. “The rising prices are a direct result of so much money coming from the banks and the Chinese banks should be very worried.”

Ms Zhang’s assessment was echoed by Fan Gang, a member of the central bank’s monetary policy committee, who warned on Wednesday that real estate in cities such as Beijing, Shanghai and Shenzhen was expensive and there was a growing risk of asset price bubbles.

Urban property prices in 70 big and medium-sized Chinese cities rose 3.9 per cent in October from a year earlier, accelerating from September’s 2.8 per cent rise, according to government figures.

Price rises in top-tier markets such as Beijing and Shanghai have been much faster. Analysts say the rebound has largely been driven by an unprecedented government-led expansion of bank lending. It is also being driven by government policies, including tax breaks, low interest rates and smaller down-payment requirements.

Investment in real estate development, a key driver of economic growth, rose 18.9 per cent in the first 10 months of the year on a year earlier, a marked acceleration from 17.7 per cent growth in January-September.

Ms Zhang said the current speculation should be a serious warning for the industry and the general economy.

“If you look at GDP growth, then China looks like a new engine driving the global economy, but if you look at how growth is being created here by so much wasteful investment you wouldn’t be so optimistic.”

China got the money.

But don’t mistakenly think China will catch up with the US soon. According to estimates by Robert Fogel at University of Chicago (see graphs below), China will catch up the US around 2020 in total GDP, but only until after 2040 will China reach the same living standards, measured by GDP per capita, as the US. 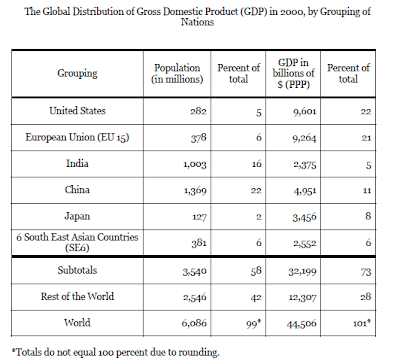 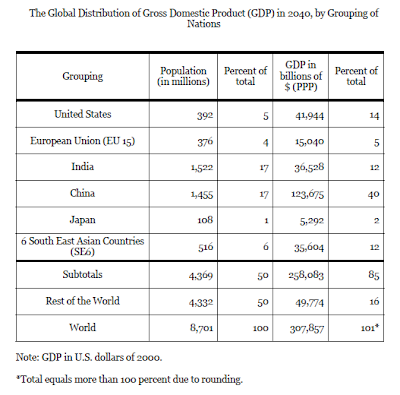 China’s big problem is it’s non-democratic. The implications are 1) China’s political system is inherently unstable; 2) Political freedom and free expression of ideas are closely tied to human creativity and innovation, which is the long-term driver for a country’s wealth. That’s where I worry most about China.

On the optimistic side, we should know political system itself is an evolutionary system. The hope is that as Chinese are getting richer, the current political system will evolve into something similar to western democracy.

Also listen to this NPR report on “While US economy struggles, China rises“.

Borrow to spend like the debts won’t be repaid forever. That’s how we got here. That’s how the US, the world superpower, jeopardizes its own currency and subjects its national security to foreign trading partners.

Also read Paul Samuelson’s warning on the US dollar
and Julian Robertson on “How we put ourselves into this terrible position“.

Who is paying taxes?

The top 5% income earners in the US bear over 60% of total tax burden. 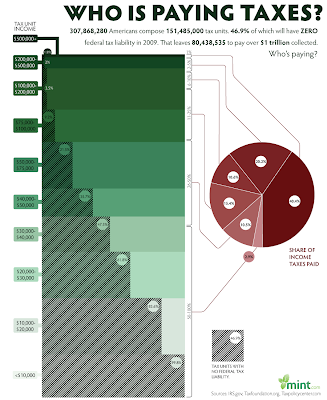