20% of outstanding mortages set to default

Some nice big-picture views of the current economy.  Pay attention to the interesting analysis on housing market – among the 56 million US residential mortgages, it’s estimated that 20% of them, or 11 million, will eventually default. Housing price is set to decline by another 5% at least; if without government support, probably by 10%. 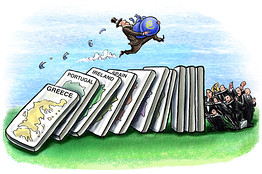 Chanos on the building boom in China

Interview of Jim Chanos, who is one of the biggest short sellers on China’s real estate developers.

Ben Bernanke would like to add something, beyond death and taxes, to life's short list of certainties: the ability of the Federal Reserve to quash inflation.

Speaking on "60 Minutes" on Sunday, the Fed's chairman declared he was "100%" confident the central bank could control an inflationary surge: "We could raise interest rates in 15 minutes if we have to. So there really is no problem with raising rates, tightening monetary policy, slowing the economy, reducing inflation, at the appropriate time."

If only it were that easy. While the Fed has managed over the past few decades to keep inflation in check, in the future, its ability to choke off inflation through interest-rate rises could be constrained by fear of destabilizing still-weak property and banking sectors.

Any swift rise in interest rates, for example, could hit home prices again, in turn pressuring banks, which held about $2.4 trillion in residential mortgage debt at the end of the third quarter and more than $1 trillion in mortgage-backed securities. Also, stubbornly high unemployment could reduce the Fed's appetite to squeeze the economy.

Of course, Mr. Bernanke may speak with such conviction because he is certain any looming inflation won't be the sort the Fed cares about. While the Fed's $600 billion bond-buying program is spurring price rises in agricultural commodities, metals and energy, these aren't generally counted in the Fed's measure of "core" inflation. Core inflation would take time to emerge. And it should come from a strengthening economy, which would in theory be able to absorb higher rates.

It depends on your definition of inflation. But Mr. Bernanke, who infamously declared in a May 2007 speech that problems in the housing market would be "limited" to the subprime sector, should know better than to give blanket assurances.

He declares, “we are not printing money”, because money supply is not moving. (I laugh…)

Mr. Bernanke called the inflation fears “way overstated” and said he had 100% confidence he could act quickly enough to keep prices in check. “We’ve been very, very clear that we will not allow inflation to rise above 2% or less,” he said. “We could raise interest rates in 15 minutes if we have to. So, there really is no problem with raising rates, tightening monetary policy, slowing the economy, reducing inflation, at the appropriate time.”

This video interview will become an evidence of the Fed’s overconfidence in a few years time.

Interview of Goldman Sachs’ chief economist. His view is that inflation is less of a worry, and the Fed won’t raise rates in 2011, not even in 2012.

In another effort to diffuse housing bubble, China has set an aggressive 2011 construction target of 10 million subsidized, affordable housing units for local governments, 72 percent higher than this year's 5.8 million units, with an emphasis on public rentals for lower income families.

(graph courtesy of US Global Investors)

China is behind gold rally

Gold's record rally has been attributed to everything from worries about inflation, the dollar and the emergence of exchange-traded funds. One big factor many may have missed: huge buying from China.

That surpassed purchases made by ETFs and surprised analysts, who until now had no clear insight into the size of China's buying.

"Everybody in the gold market knew there was a surge in investment demand, but they didn't know it was China," said Jeff Christian, managing director at CPM Group.

China's import growth is a reminder of the country's huge but nascent purchasing power.

It comes as the government loosens its restrictions on gold purchases by financial institutions and individual investors. In August, the country began allowing more banks to import and export gold, opening up the gold market to the institutions and their clients.

Then this week, the Chinese securities regulator approved the country's first gold fund designed to invest in overseas-listed gold ETFs, a move analysts interpreted as another bullish sign for gold.

"The big picture is that China is continuing to relax the rules governing the domestic gold market," said Martin Murenbeeld, chief economist of DundeeWealth Inc., which oversees $69.9 billion in assets. "What we are seeing is the latent demand that has been there all the time and now can be exercised in the market because now the market is freed."

The World Gold Council estimates that China's gold demand could double in 10 years as more investors there embrace precious metals.

Until several years ago, China's gold market was strictly controlled by the central bank, which bought all the gold mined domestically. It then sold the metal to jewelry makers. The country, which is now the largest gold producer, remained largely self-sufficient in gold, with imports at a meager 31 metric tons in 2009, according to GFMS Ltd.

This year, fears of inflation have driven many Chinese investors to include gold in their portfolios as a store of value. At the Shanghai Gold Exchange, trading volume increased 43%, to 5,014.5 tons, in the first 10 months of 2010, exchange Chairman Shen Xiangrong said, according to Xinhua.

At a speech at the China Gold and Precious Metals Summit in Shanghai Thursday, Mr. Shen detailed the size of China's imports this year, Xinhua said. Those purchases were big enough to absorb all the gold that the International Monetary Fund had shed during that time period, which stood at 148.6 tons. It also dwarfed the SPDR Gold Shares, the world's largest gold-backed ETF, which added 159.48 tons of gold into its holdings in the same period.

China also is home to a booming gold-mining industry that keeps it as the world's largest gold producer. Wednesday, China's Ministry of Industry and Information Technology said the nation's gold production reached 277.017 metric tons in the January-to-October period, up 8.8% from the same period last year.

China's 2010 gold production is expected at about 350 metric tons, according to Standard Bank head of commodity strategy Walter de Wet.

Pace of RMB appreciation likely to pick up

December 2, 2010 / 1 Comment on Pace of RMB appreciation likely to pick up

So far this year, Chinese RMB has appreciated 3.1% against the US dollar. But it has depreciated against majority of other currencies (especially the currencies of the emerging market) on trade-weighted basis.

Link to the full text of Marty's piece.