Some fantastic charts from NYT showing how interconnected our financial systems are. Hat tip to Blake LeBaron at Brandeis.

(click on the image for some really nice network charts)

For the interconnection between Europe and emerging markets, please read my earlier post here.

It’s one of the fundamental assumptions in economics that people’s welfare will improve with more choices, and more varieties.  In the following TED video, Sheena Iyengar at Columbia challenges such view with some vivid examples.  She also offered some clever ways to avoid the problem of choice-overload.

On Thursday, the 4-week moving average of weekly jobless claims reached the lowest level since April 2008. The US labor market continues to show sign of thawing.

If this trend continues, consumer confidence is likely to bounce back. Then the US will be on the track of a virtuous cycle: business investment will follow, so will bank lending.  We need to wait for more data in coming weeks to confirm such trend.

Both precious metal, the current relative valuation of platinum vs. gold makes platinum a better bet than gold.

Jagdish Bhagwati analyzes the recent move by the US to establish Trans-Pacific Partnership (TPP).

As if undermining the World Trade Organization’s Doha Round of global free-trade talks was not bad enough (the last ministerial meeting in Geneva produced barely a squeak), the United States has compounded its folly by actively promoting the Trans-Pacific Partnership (TPP). President Barack Obama announced this with nine Asian countries during his recent trip to the region.

The TPP is being sold in the US to a compliant media and unsuspecting public as evidence of American leadership on trade. But the opposite is true, and it is important that those who care about the global trading system know what is happening.

Link to the full text.

The Fed may raise interest rate sooner than expected

I estimated the following simple formula for setting the federal funds rate:

The parameters in this formula were chosen to offer the best fit for data from the 1990s.

Eddy Elfenbein has recently replotted this equation.  Here it is: 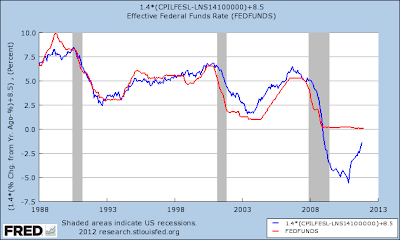 The interest rate recommended by the equation is the blue line, and the actual rate from the Fed is the red line.

Not surprisingly, the rule recommended a deeply negative federal funds rate during the recent severe recession.  Of course, that is impossible, which is why the Fed took various extraordinary steps to get the economy going.  But note that the rule is now moving back toward zero.  As Eddy points out, “At the current inflation rate, the unemployment rate needs to drop to 8.3% from the current 8.5% for the model to signal positive rates. We’re getting close.”

The only caveat is the estimation was done in 1990s.  It captured the Fed’s interest rate policy in 1990s, but may not be accurate for the current Fed, especially when the Fed chooses to deviate from the Taylor rule.