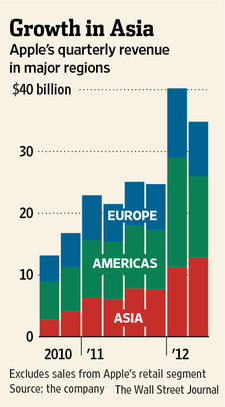 Walter Isaacson shares his experience writing Jobs’ biography, a lot of interesting secret stories – what to make an innovative man who transformed the whole technology industry.

How to turn your ipod touch into an iphone

Some neat invention from China.  So far, Apple has not cried foul. China’s disassemble-reassemble imitations have been running wild – when will China innovate on its own?

Compare speed of the four generations of Apple iPhones.

Time to upgrade my iPhone from 1G to 3G 🙂 (no 4G yet, due to its reception flaw and slow start-up).

Never underestimate what human capital and knowledge can do. I am optimistic that in 50 years, human welfare will be at much higher level than what any of us can possibly imagine today.

Thanks to its immigration policy, the U.S. is still leading the pack.