By Paul Deng in Uncategorized on July 28, 2008.
WSJ reports: high gas price causes Americans to cut back driving, reducing Federal fuel tax income, which is the financial source to repair and maintain highways and mass-transit systems.

A report to be released Monday by the Transportation Department shows that over the past seven months, Americans have reduced their driving by more than 40 billion miles. Because of high gasoline prices, they drove 3.7% fewer miles in May than they did a year earlier, the report says, more than double the 1.8% drop-off seen in April. 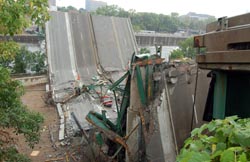 The cutback furthers many U.S. policy goals, such as reducing oil consumption and curbing emissions. But, coupled with a rapid shift away from gas-guzzling vehicles, it also means consumers are paying less in federal fuel taxes, which go largely to help finance highway and mass-transit systems. As a result, many such projects may have to be pared down or eliminated.
Full articles here…