Dealing with loss of control

WSJ’s intelligent investor column tells investors how to deal with loss of control.

If Monday’s 800-point intraday plunge in the Dow Jones Industrial Average made you want to give up and get out of stocks, you’re not alone. 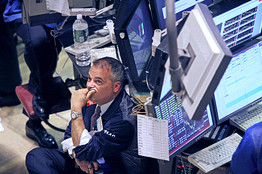 I’ve written column after column advising investors to buy stocks on the way down, and readers are in pain. “You say not to bail,” one reader emailed me over the weekend, “but all funds are down. … This whole stock market has me so upset, [I feel] like a deer in the headlights.” Another wrote: “We are, you see, about to enter another Great Depression, just like the last one only much worse. … It’s way too early to be buying stocks. … Or I could be really nasty and ask you which brokerage house paid you to run this stupid column now.”

Right or wrong, I work only for The Wall Street Journal. But what all of us are feeling is the loss of control we sense when we are faced with anything that is frightening, inexplicable and important.

That lack of control not only makes us feel powerless; it also changes the way we view the world. Very small amounts of fragmentary information can suddenly seem to be fraught with meaning: Did something move on “the grassy knoll” the day John F. Kennedy was assassinated? Will one down day in the stock market lead to another and another?

Even the greatest investors have felt the same kind of fear and pain you are probably feeling. For proof, look no further than “Security Analysis,” the classic textbook by Benjamin Graham and David Dodd, which has just been reissued in a commemorative edition. Graham was one of the best money managers of the 20th century, a brilliant analyst and market historian, and Warren Buffett’s most influential teacher and mentor.

The new book reprints the text of the 1940 printing, in which Graham addressed the market devastation of the previous decade. Just as the roughly 90% fall between 1929 and 1932 had seemed to be fading, the stock market dropped sharply again in the late 1930s. As market historian James Grant puts it, by the time Graham was ready to finish the 1940 edition, “He had had it.”

That helps explain one of the great ironies of market commentary. Graham himself stuck largely with stocks in his investment fund. But at the conclusion of his book, he advised the institutional investors among his readers to shun the stock market entirely and invest in bonds. Graham doubted they could stomach “the heavy responsibilities and the recurring uncertainties” stirred up by stocks.

How does the feeling of being overwhelmed affect investors? Research conducted by psychologists Jennifer Whitson of the University of Texas and Adam Galinsky of Northwestern University shows how it changes our perceptions. In one of their experiments, people were first rattled by a computer that gave them unpredictable feedback on their performance at a trivial task, stripping them of their sense of control. These people became much more likely to perceive shapes in a swarm of random dots.

“When you sense that you have a lack of control,” says Prof. Whitson, “you’re much more likely to try twisting and pretzeling explanations and seeing patterns that aren’t even there.”

In a related experiment, investors who had been stripped of their sense of control by market volatility were convinced that they had read more negative evidence about a company than they had actually seen — and were less willing to buy the company’s stock.

In other words, when our sense of control is threatened, we feel the natural urge to pretend that whatever information we do have is more complete and reliable than it is. Imagining that we know what’s coming next (even if we think it will be bad) gives us a slight feeling of comfort.

As an investor, however, it’s absolutely vital to separate what you can truly control from what is beyond your control. The only thing you can know for sure is that stocks are steadily getting cheaper. You cannot control whether or not the market will continue to trash stocks, but you can control how you respond.

If we are not headed into a depression, panic hardly seems justifiable.

What if we are?

Even during the Great Depression, the best investment results were earned not by the people who fled stocks for the safety of bonds and cash, but by those who stepped up and bought stocks and kept buying on the way down. A man named Floyd Odlum made millions of dollars putting his cash into battered stocks. His motto throughout the market nightmare of 1929 to 1932 never changed: “There’s a better chance to make money now than ever before.”