By Paul Deng in Uncategorized on November 9, 2008.

Paul Krugman defends FDR and advises Obama to be bolder:

Everybody’s talking new New Deal these days — and, predictably, the FDR-haters are out in force, with all the usual claims about FDR having actually made the Great Depression worse. (To the right, way back when, FDR was “That Man.” Now Obama is “that one.” Interesting.)

Eric Rauchway is all over this. Basically, the anti-FDR argument on the data is based on (a) considering people employed by the WPA “unemployed” (even though they were getting paid, and building public works that are in use to this day) plus (b) always focusing on 1938 — the year in which the economy suffered a serious setback from the progress of the previous four years.

Let me offer two pictures, beyond what Eric provides, to clarify things.

First, here’s real GDP (in logs) from 1929 to 1941, plus the trend. (That’s to bypass the employment nonsense). You can see that the economy made up a lot of the output gap before the 1938 setback, but by no means all. 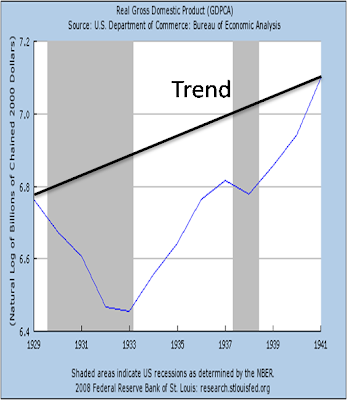 Now, you might say that the incomplete recovery shows that “pump-priming”, Keynesian fiscal policy doesn’t work. Except that the New Deal didn’t pursue Keynesian policies. Properly measured, that is, by using the cyclically adjusted deficit, fiscal policy was only modestly expansionary, at least compared with the depth of the slump. Here’s the Cary Brown estimates, from Brad DeLong: 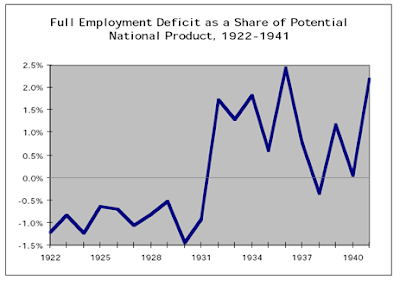 Net stimulus of around 3 percent of GDP — not much, when you’ve got a 42 percent output gap. FDR might have been more of a Keynesian if Keynesian economics had existed — The General Theory wasn’t published until 1936. Note in particular that in 1937-38 FDR was persuaded to do the “responsible” thing and cut back — and that’s what led to the bad year in 1938, which to the WSJ crowd defines the New Deal.

Implications for Obama: be inspired by FDR, but don’t imitate him slavishly. In particular, your economic policy should be bolder, not more cautious.

← Setser: How Severe a slump in China? Morgan Stanley says Euro breakup is not impossible but unlikely →