Home » Uncategorized » Bank Lending: Where is the clog?

Bank Lending: Where is the clog?

WSJ questions the ‘conventional wisdom’ that banks are not lending in current crisis.

All around Washington, policy makers are scrambling to figure out how to get banks lending again. Lawmakers have criticized banks for not using new federal money to make loans and have threatened to place conditions on additional money. Regulators last week sent out a directive, encouraging banks not to hold back on lending.

But there’s a flaw in that logic. Banks actually are lending at record levels. Their commercial and industrial loans, at $1.6 trillion in early November, were up 15% from a year earlier and grew at a 25% annual rate during the past three months, according to weekly Federal Reserve data. Home-equity loans, at $578 billion, were up 21% from a year ago and grew at a 48% annual rate in three months.

I pulled the data out from Federal Reserve. Below chart shows you what banks loans (industrial and commercial) look like (the blue line). The y-o-y change is still positive, well above 10%. 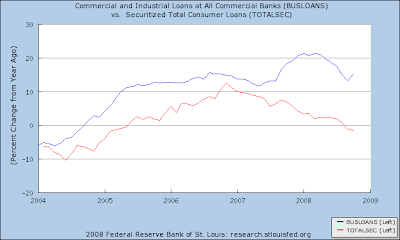 The real problem, according to WSJ, is the old loans got backstopped by banks and these revolving credit lines are crowding out new loans. Also in crisis, loans are not getting securitized due to the credit market turmoil (the red line in the chart above):

The point is that banks are being forced to act as backstops to a reeling financial system just as the banks, too, are vulnerable. Simply demanding they lend more misses the broader point of the role they’re playing in the crisis, and how to manage it.

“They provide a measure of protection to vulnerable firms, helping them forestall financial distress.” But there is a dangerous downside. During the boom, many of these credit lines were extended to firms with shaky prospects, like GM. Now, banks are on the hook to lend to them, often even if they don’t want to. This is likely crowding out making new loans to healthier firms.

Crowding out is one problem. Another is the markets. During the boom, many bank loans were packaged into securities. With markets for those securities shut down, banks have lost this important escape valve for making new loans.

They further looked at new bank loans to large corporate borrowers — the kinds of loans that typically get resold and packaged into securities. While overall banks’ loan books are growing, this kind of lending, which used to get distributed among banks and other investors, fell by 46% in the August-to-October period from the same period a year earlier.