China’s exports in December fell 2.8% from a year earlier to $111.16 billion, while its imports fell 21.3% to $72.18 billion, the General Administration of Customs said Tuesday.

Those falls were bigger than in November, when exports fell 2.2% from a year earlier and imports slumped 17.9%.

The drop in December’s exports was better than market expectations of a 3.8% decline, but the fall in imports was above expectations of a 19.1% drop, according to the median forecasts of 12 economists surveyed by Dow Jones Newswires. 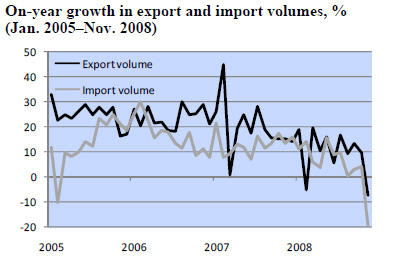 Though the trade surplus in December remained near historically wide levels and was above the $34 billion expected by economists, the fact it was due more to falling imports than strong exports underscored the troubling nature of the data.

The drop in imports is an indicator of further weakness in exports in coming months, because some of the imports are components and raw materials used to make finished products that are then sold to consumers abroad, said Sherman Chan, an economist at Moody’s Economy.com.