China’s official urban unemployment rate jumped for the first time since 2003 and may climb to an almost 30-year high as exports slump and a slowdown deepens in the world’s third-biggest economy.

A rate as high as the government’s 4.6 percent target for this year, which was announced … today, would be the worst since 1980, official data show. Premier Wen Jiabao said yesterday that the government must do more to preserve social stability in the face of a “very grim” job outlook. 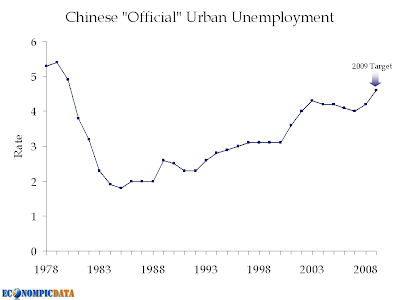 I have to say the title is a little bit misleading because as you can see from the graph the urban unemployment has been trending higher since early 80s due to structural reform of State-Owned-Enterprises (SOEs). The global financial crisis will certainly increase jobless rate relating to export sectors, but don’t scare yourself and blame all to this global recession.

← Becker on infrastructure spending Unemployment: when to bottom? →