Here’s a question I hear a lot (most recently during the Q&A portion of a speech delivered yesterday by my boss, Atlanta Fed president Dennis Lockhart): Has monetary policy become so expansive that the central bank’s mandate to maintain price stability has been fundamentally compromised? Is the increase in the scale of the Federal Reserve’s balance sheet inherently inflationary?

Jim Hamilton covered much of the territory implied by these questions in a very extensive Econbrowser post not too long ago, but the distinction between money creation and Fed balance sheet expansion continues to be confounded. Here, for example, is a passage from the Wall Street Journal’s Real Time Economics coverage of Stanford professor John Taylor’s (not exactly glowing) review of recent Federal Reserve action, delivered at this year’s annual meeting of the American Economic Association:

“The Fed has launched nearly a dozen new programs in the past year to address the crisis. Its strategy is to target specific markets in distress—from commercial paper to asset backed securities to money market mutual funds and stresses overseas—with programs tailored to their problems. It also has gotten deeply involved in rescues of individual firms like Bear Stearns, American International Group and Citigroup.

“The Fed has funded these programs by pumping reserves into the banking system—essentially creating new money. In the process, its balance sheet has ballooned from less than $900 billion to more than $2 trillion.”

The record though, as the article goes on to note, is that not all of that $2 trillion represents an increase in the money supply: 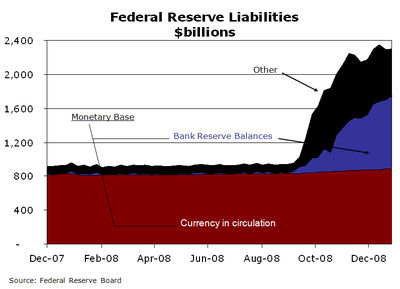 Only the blue portion of the graph above represents “pumping reserves into the banking system”—a fact that was covered pretty well in the aforementioned Econbrowser post—and in an even earlier post at News N Economics. In simple terms, the size of the Fed’s balance sheet is not the same thing as the size of the monetary base (the sum of currency in circulation and reserve balances kept by banks with the Federal Reserve).

Of course, John Taylor’s point was not that all of the increase in the balance sheet has amounted to pumping in reserves, just that a lot of it has, which is clearly true. But even here there may be less to the potential inflationary impact than meets the eye. In his speech at the London School of Economics earlier today, Chairman Bernanke explained:

“Some observers have expressed the concern that, by expanding its balance sheet, the Federal Reserve is effectively printing money, an action that will ultimately be inflationary. The Fed’s lending activities have indeed resulted in a large increase in the excess reserves held by banks. Bank reserves, together with currency, make up the narrowest definition of money, the monetary base; as you would expect, this measure of money has risen significantly as the Fed’s balance sheet has expanded. However, banks are choosing to leave the great bulk of their excess reserves idle, in most cases on deposit with the Fed. Consequently, the rates of growth of broader monetary aggregates, such as M1 and M2, have been much lower than that of the monetary base.” 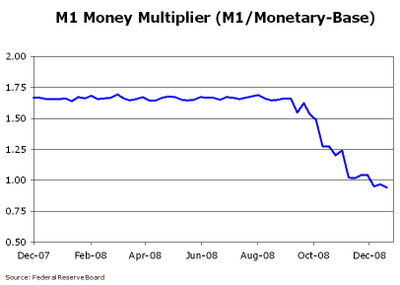 The money multiplier measures the amount of money in the hands of the public—the M1 measure in this case, which is composed mainly of cash and demand deposits (i.e., checking and debit accounts)—that are created by a dollar of monetary base. That amount fell considerably when the Fed introduced the payment of interest on bank reserves.

That said, despite the fall in the money multiplier, the M1 measure of money has also expanded fairly noticeably since late summer: 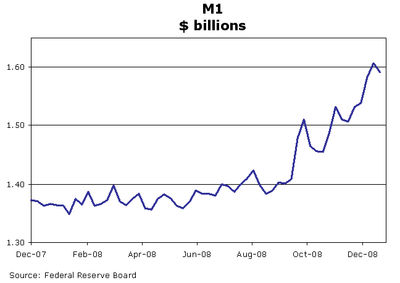 The increase in M2—a slightly broader measure of money that adds to M1 items like savings accounts and time deposits—has been somewhat slower but still on the rise: 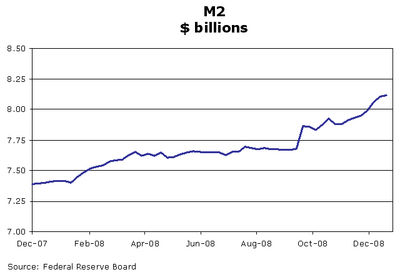 From December 2007 through August of last year, M1 and M2 grew by about 1.2 percent and 3.9 percent respectively. Since September—after which the rapid expansion of the Fed’s balance sheet began and the Fed began to pay interest on reserves—the corresponding growth rates have been 13.4 percent and 5.9 percent.

Are those growth rates substantial? That is a tricky question—whether a particular growth rate of money is substantial or not can only be determined in relation to the pace of money demand (which has almost certainly accelerated as interest rates have fallen and the taste for safe and liquid assets risen). But I take two lessons from our early experience with the asset-oriented policies emphasized in the Bernanke and Lockhart speeches. First, expansions of the balance sheet need not imply expansions of the money supply. Furthermore, as Chairman Bernanke emphasized, the Fed has the capacity to contract reserves going forward:

“… the Treasury could resume its recent practice of issuing supplementary financing bills and placing the funds with the Federal Reserve; the issuance of these bills effectively drains reserves from the banking system, improving monetary control. Longer-term assets can be financed through repurchase agreements and other methods, which also drain reserves from the system.”

The second lesson, clear in the M1 and M2 charts above, is that despite the payment of interest on reserves and near-zero federal funds rates, it is still possible to induce increases in the broad money supply through the standard channel of injecting reserves into the banking system.

Whatever direction you think the money supply ought to go, these observations should come as comforting news.

← How to get China spending: It’s Hard. Financial sector in historical perspective →