If you believe stock market, like the economy, has its own cycles, then we’ve got a trouble. 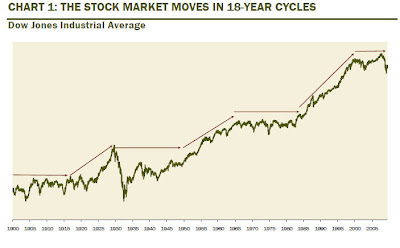 China in brighter green; too early for bubble talk

China’s recent Q2 GDP grew by 7.9%, showing the economy is in strong recovery, also confirming my early observation that despite its high openness to international trade, China’s growth is largely independent from the US. With China’s green shoots greener, investors worldwide poured in huge amount money into the region. Since Chinese stock market is still largely closed for the foreign investors, Hong Kong has had a big surge. Are we witnessing another great stock bubble forming in China? This piece from Economist says it’s still too early for the bubble talk.

CHINESE growth was already the envy of the world. Now recession-stricken countries will be turning an even brighter green. On July 16th new figures showed China’s GDP growth quickened to 7.9% in the year to the second quarter. That is healthy enough by anyone’s standards but the headline number conceals a more astonishing rebound. Goldman Sachs estimates that GDP grew at an annualised rate of 16.5% in the second quarter compared with the previous three months (see chart 1). Over the same period, America’s economy probably contracted again. China’s economic stimulus has clearly been hugely effective. So effective, indeed, that some economists are now worrying it may be working rather too well.

In the year to June fixed investment surged by 35%, car sales rose by 48%, and purchases of homes by more than 80%. After falling last year, home prices are now rising briskly in some big cities, and share prices have soared by 80% from their November low. Domestic spending has been spurred partly by the government’s stimulus package, but probably even more important was the scrapping of restrictions on bank lending late last year. In June new lending was more than four times larger than a year earlier (chart 2).

One reason why the economy has rebounded so quickly is that much of the slowdown was self-inflicted, rather than the result of America’s economic collapse. In 2007 concerns about overheating prompted the government to curb the flow of credit for construction and home buying. This caused China’s economy to slow sharply even before the global financial crisis. Then, last November, the government turned the credit tap back on full.

That has given a big boost to domestic spending but raised concerns that the flood of liquidity will push up inflation, fuel bubbles in shares and housing, and store up bad loans. The M2 measure of money surged by 29% in the year to June. In fact the risk of high inflation in the near future appears low: Chinese consumer prices fell by 1.7% in the year to June, and spare capacity at home and abroad is holding down prices. But asset prices could be a bigger danger. According to one estimate, 20% of new lending went into the stockmarket in the first five months of this year.

It is probably too soon to use the word “bubble”. The stockmarket is still at only half its 2007 peak and, although house prices have risen sharply this year in Shanghai and Shenzhen, the nationwide average is barely higher than it was a year ago. But the pace of bank lending is unsustainable, and America’s recent experience suggests that it is better to prevent bubbles forming than to mop up the mess afterwards. Several officials at the central bank have said lending should be curbed.

At the moment, the prime minister, Wen Jiabao, is signalling that he wants monetary policy kept fairly loose. Exports remain weak and the government fears premature tightening could derail the recovery. It is also keen to create jobs and maintain social stability in the months before the 60th anniversary of Communist Party rule in October.

Still, the central bank has begun to tug gently at the reins. It has nudged up money-market interest rates and warned banks that it intends to increase its scrutiny of new bank loans. The China Banking Regulatory Commission has warned banks to stick to rules on mortgages for second homes, which require a down-payment of at least 40% of a property’s value.

The recent rebound in house sales is, in fact, exactly what the government is aiming for, since it is using property as a way to spur private consumption. Higher house sales encourage more spending on furniture and consumer appliances. Construction also creates lots of jobs; indeed, it employs almost as many workers as the export sector. Since October the government has encouraged people to buy houses by cutting the minimum mortgage down-payment on their main home from 30% to 20% and by reducing stamp duty and other taxes on property transactions. Stronger sales are now feeding through into new house building: housing starts rose by 12% in the year to June, the first growth in 12 months.

Given the importance of property to domestic demand, the government is highly unlikely to want to clamp down hard on the housing market. Despite the recent lending boom, Chinese banks’ mortgage lending is still very conservative compared with that in America—at the peak of America’s housing bubble it was easy to get a mortgage for 100% or more of the value of a home. Nevertheless, the lesson of America’s financial crisis for China’s government is plain: overly loose lending should never be ignored.