McKinnon’s Rescue Plan for the Dollar

A Rescue Plan for the Dollar

Central banks ended the year with a spectacular injection of liquidity to lubricate the economy. On Dec. 18, the European Central Bank alone pumped $502 billion — 130% of Switzerland's annual GDP — into the credit markets. The central bankers also signaled that they will continue pumping "as long as necessary." This delivered plenty of seasonal cheer to bankers who will be able to sweep dud loans and related impaired assets under the rug — temporarily.

But the injection of all this liquidity coincided with a spat of troubling inflation news. On a year-over-year basis, the consumer-price and producer-price indexes for November jumped to 4.3% and 7.2%, respectively. Even the Federal Reserve's favorite backward-looking inflation gauge — the so-called core price index for personal consumption expenditures — has increased by 2.2% over the year, piercing the Fed's 2% inflation ceiling. 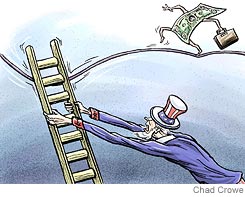 Contrary to what the inflation doves have been telling us, inflation and inflation expectations are not well contained. The dollar's sinking exchange value signaled long ago that monetary policy was too loose, and that inflation would eventually rear its ugly head.

This, of course, hasn't bothered the mercantilists in Washington, who have rejoiced as the dollar has shed almost 30% of its value against the euro over the past five years. For them, a maxi-revaluation of the Chinese renminbi against the dollar, and an unpegging of other currencies linked to the dollar, would be the ultimate prize.

As the mercantilists see it, a decimated dollar would work wonders for the U.S. trade deficit. This is bad economics and even worse politics. In open economies, ongoing trade imbalances are all about net saving propensities, not changes in exchange rates. Large trade deficits have been around since the 1980s without being discernibly affected by fluctuations in the dollar's exchange rate.

So what should be done? It's time for the Bush administration to put some teeth in its "strong" dollar rhetoric by encouraging a coordinated, joint intervention by leading central banks to strengthen and put a floor under the U.S. dollar — as they have in the past during occasional bouts of undue dollar weakness. A stronger, more stable dollar will ensure that it retains its pre-eminent position as the world's reserve, intervention and invoicing currency. It will also provide an anchor for inflation expectations, something the Fed is anxiously searching for.

The current weakness in the dollar is cyclical. The housing downturn prompted the Fed to cut interest rates on dollar assets by a full percentage point since August — perhaps too much. Normally, the dollar would recover when growth picks up again and monetary policy tightens. But foreign-exchange markets — like those for common stocks and house prices — can suffer from irrational exuberance and bandwagon effects that lead to overshooting. This is precisely why the dollar has been under siege.

If the U.S. government truly believes that a strong stable dollar is sustainable in the long run, it should intervene in the near term to strengthen the dollar.

But there's a catch. Under the normal operation of the world dollar standard which has prevailed since 1945, the U.S. government maintains open capital markets and generally remains passive in foreign-exchange markets, while other governments intervene more or less often to influence their exchange rates.

Today, outside of a few countries in Eastern Europe linked to the euro, countries in Asia, Latin America, and much of Africa and the Middle East use the dollar as their common intervention or "key" currency. Thus they avoid targeting their exchange rates at cross purposes and minimize political acrimony. For example, if the Korean central bank dampened its currency's appreciation by buying yen and selling won, the higher yen would greatly upset the Japanese who are already on the cusp of deflation — and they would be even more upset if China also intervened in yen.

Instead, the dollar should be kept as the common intervention currency by other countries, and it would be unwise and perhaps futile for the U.S. to intervene unilaterally against one or more foreign currencies to support the dollar. This would run counter to the accepted modus operandi of the post-World War II dollar standard, a standard that has been a great boon to the U.S. and world economies.

The timing for joint intervention couldn't be better. America's most important trading partners have expressed angst over the dollar's decline. The president of the European Central Bank (ECB), Jean Claude Trichet, has expressed concern about the "brutal" movements in the dollar-euro exchange rate. Japan's new Prime Minister, Yasuo Fukuda, has worried in public about the rising yen pushing Japan back into deflation. The surge in the Canadian "petro dollar" is upsetting manufacturers in Ontario and Quebec. OPEC is studying the possibility of invoicing oil in something other than the dollar. And China's premier, Wen Jiabao, recently complained that the falling dollar was inflicting big losses on the massive credits China has extended to the U.S.

If the ECB, the Bank of Japan, the Bank of Canada, the Bank of England and so on, were to take the initiative, the U.S. would be wise to cooperate. Joint intervention on this scale would avoid intervening at cross-purposes. Also, official interventions are much more effective when all the relevant central banks are involved because markets receive a much stronger signal that national governments have made a credible commitment.

This brings us to China, and all the misplaced concern over its exchange rate. Given the need to make a strong-dollar policy credible, it is perverse to bash the one country that has done the most to prevent a dollar free fall. China's massive interventions to buy dollars have curbed a sharp dollar depreciation against the renminbi; they have also filled America's savings deficiency and financed its trade deficit.

As the renminbi's exchange rate is the linchpin for a raft of other Asian currencies, a sharp appreciation of the renminbi would put tremendous upward pressure on all the others — including Korea, Japan, Thailand and even India. Forcing China into a major renminbi appreciation would usher in another bout of dollar weakness and further unhinge inflation expectations in the U.S. It would also send a deflationary impulse abroad and destabilize the international financial system.

China, with its huge foreign-exchange reserves (over $1.4 trillion), has another important role to play. Once the major industrial countries with convertible currencies — led by the ECB — agree to put a floor under the dollar, emerging markets with the largest dollar holdings — China and Saudi Arabia — must agree not to "diversify" into other convertible currencies such as the euro. Absent this agreement, the required interventions by, say, the ECB would be massive, throwing the strategy into question.

Cooperation is a win-win situation: The gross overvaluations of European currencies would be mitigated, large holders of dollar assets would be spared capital losses, and the U.S. would escape an inflationary conflagration associated with general dollar devaluation. For China to agree to all of this, however, the U.S. (and EU) must support a true strong-dollar policy — by ending counterproductive China bashing.