Home » Uncategorized » What contributed to the macro problem we have now

What contributed to the macro problem we have now

By Paul Deng in Uncategorized on February 16, 2008.
Krugman is often too liberal for me, but I still trust his economics.
Defining the macroeconomic problem
by Paul Krugman

As we debate interest rates, fiscal stimulus and all that, I thought it might be worth backing up to think about what our macroeconomic problem is right now.

Basically, I’d say, the problem is twofold. First, in the mid-00s the U.S. economy got badly unbalanced — too much dependence on housing and housing-inflated consumer spending, too big a trade deficit. This figure shows “deviations” in share of GDP — it’s the difference, in percentage points of GDP, between 2007 and average 1980-2000 spending on consumption (C), nonresidential investment (NR), residential investment (R), and net exports (NX). Notice that even with the housing collapse in progress, residential investment was still running a bit high — this year it will surely be well below “normal.” But the main thing at this point is high consumption offset by a high trade deficit. 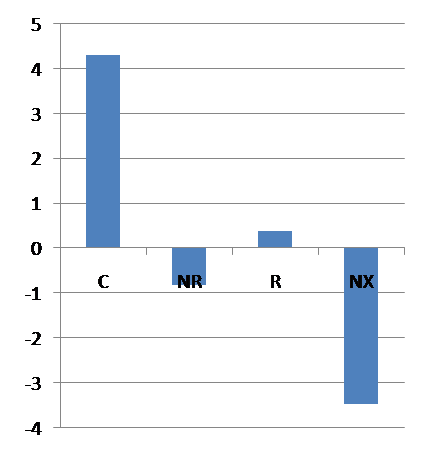 Second, in the process we also got a credit bubble that’s now bursting, and threatening to take down spending that wasn’t all that high to begin with — like business investment.

What we want, and will eventually get, is a rebalancing: smaller trade deficits, consumer spending more in line with income, more normal housing spending. The trouble is in getting there. At the moment it seems likely that consumption and housing investment will fall faster than net exports can rise — probably with additional downward pressure from at least some types of business investment, especially commercial real estate. The result will be a recession or at least something that feels like one.

The goal of monetary and fiscal policy should be to bridge the gap — to sustain spending until a falling trade deficit comes to the rescue, and to hasten the rise in net exports (remember, in the current context a weak dollar is good.)