By Paul Deng in Uncategorized on July 31, 2008.
I don't believe demand in developing countries can drive oil price this high in such a short period of time. Speculation, flight to quality or safety,  in time of crisis and rising inflation, or whatever you call it, is the ultimate culprit.  Now, various indicators seem to point out we are finally near the reckoning day: the bubble burst time.
According to WSJ's commodity report,

The market has taken on a distinct chill…with funds looking to sell oil futures outnumbering those seeking to buy for the first time since early 2007, and most of the long-term money betting that oil prices will continue to sink.

Perhaps the best glimpse of the changed sentiment can be seen in traders' prices for oil far into the future. In late May, contracts reaching out to 2016 were all selling for more than the then-current price, which was around $130 a barrel. That trend held until the middle of this month.

The curve has since sharply reversed, so that contracts for oil four or five years from now are going for less than the current price. Trading on the Nymex has tilted toward short sellers, or those betting that prices will go down, according to the most recent report by the Commodity Futures Trading Commission.

Also, according to Paul Krugman, high oil prices reduces demand with a delay. First, people don't think the high price will sustain, so they keep their driving behavior or still buying big SUVs; after a while, people gradually realize this time is for real, so started to shift their habits, then you see a big demand drop.  Krugman summarizes this in a nice graph, a modified version of the demand curve: 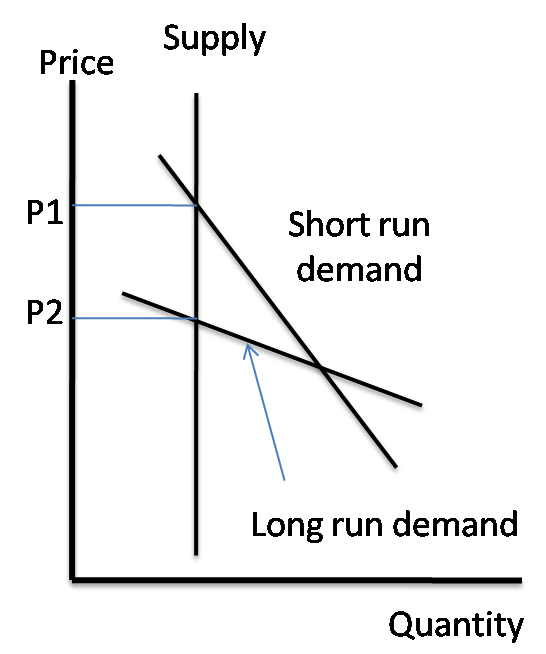