China has become the top investment choice of emerging market funds and Asian investors in spite of the country’s deteriorating economic outlook, according to a global survey of fund managers. 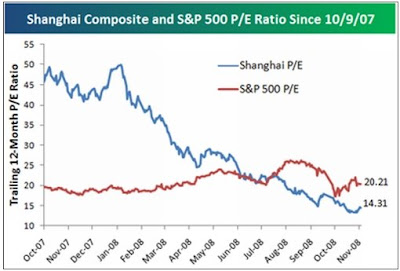 A record 67 per cent of investors are overweight in Chinese equities relative to the total assets they have under management, compared with just 19 per cent of asset managers favouring China a year ago, the Merrill Lynch monthly survey showed.

This is an abrupt turnround from the situation three months ago when a majority of fund managers were underweight on China. The 149 fund managers questioned control $536bn of assets.

“China is the preferred market despite the collapse of growth expectations, because investors think the country still has lots of policy tools to support growth, and see it as less hard hit by the credit crunch,” said Michael Hartnett, emerging markets equity strategist at Merrill.

However, the growth outlook for China is deteriorating, with a net 86 per cent of respondents expecting the Chinese economy to weaken in the next 12 months.

Mr Hartnett described the magnitude of China’s slowdown as a “wild card” and said it was still unclear whether the country would face a hard or soft landing.

China is well placed to cash in on the collapse in commodities prices as it is a net importer of oil and has a strong currency. It has also been more insulated from the credit crunch than other parts of the world. “China is currently seen as the sole Asian beneficiary of policy stimulus and falling oil prices,” Mr Hartnett said.