WHEN the Obama administration finally unveils its proposal to get the economy on the road to recovery, the centerpiece is likely to be a huge increase in government spending. But there are ample reasons to doubt whether this is what the economy needs. 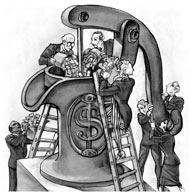 Arguably, the seeds of the spending proposal can be found in the classic textbook by Paul A. Samuelson, “Economics.” First published in 1948, the book and others like it dominated college courses in introductory economics for the next half-century. It is a fair bet that much of the Obama team started learning how the economy works through Mr. Samuelson’s eyes. Most notably, Lawrence H. Summers, the new head of the National Economic Council, is Mr. Samuelson’s nephew.

Written in the shadow of the Great Depression and World War II, Mr. Samuelson’s text brought the insights of John Maynard Keynes to the masses. A main focus was how to avoid, or at least mitigate, the recurring slumps in economic activity.

“When, and if, the next great depression comes along,” Mr. Samuelson wrote on the first page of the first edition, “any one of us may be completely unemployed — without income or prospects.” He added, “It is not too much to say that the widespread creation of dictatorships and the resulting World War II stemmed in no small measure from the world’s failure to meet this basic economic problem adequately.”

Economic downturns, Mr. Keynes and Mr. Samuelson taught us, occur when the aggregate demand for goods and services is insufficient. The solution, they said, was for the government to provide demand when the private sector would not. Recent calls for increased infrastructure spending fit well with this textbook theory.

But there is much to economics beyond what is taught in Econ 101. In several ways, these Keynesian prescriptions make avoiding depressions seem too easy. When debating increased spending to stimulate the economy, here are a few of the hard questions Congress should consider:

HOW MUCH BANG FOR EACH BUCK? Economics textbooks, including Mr. Samuelson’s and my own more recent contribution, teach that each dollar of government spending can increase the nation’s gross domestic product by more than a dollar. When higher government spending increases G.D.P., consumers respond to the extra income they earn by spending more themselves. Higher consumer spending expands aggregate demand further, raising the G.D.P. yet again. And so on. This positive feedback loop is called the multiplier effect.

In practice, however, the multiplier for government spending is not very large. The best evidence comes from a recent study by Valerie A. Ramey, an economist at the University of California, San Diego. Based on the United States’ historical record, Professor Ramey estimates that each dollar of government spending increases the G.D.P. by only 1.4 dollars. So, by doing the math, we find that when the G.D.P. expands, less than a third of the increase takes the form of private consumption and investment. Most is for what the government has ordered, which raises the next question.

WILL THE EXTRA SPENDING BE ON THINGS WE NEED? If you hire your neighbor for $100 to dig a hole in your backyard and then fill it up, and he hires you to do the same in his yard, the government statisticians report that things are improving. The economy has created two jobs, and the G.D.P. rises by $200. But it is unlikely that, having wasted all that time digging and filling, either of you is better off.

People don’t usually spend their money buying things they don’t want or need, so for private transactions, this kind of inefficient spending is not much of a problem. But the same cannot always be said of the government. If the stimulus package takes the form of bridges to nowhere, a result could be economic expansion as measured by standard statistics but little increase in economic well-being.

The way to avoid this problem is a rigorous cost-benefit analysis of each government project. Such analysis is hard to do quickly, however, especially when vast sums are at stake. But if it is not done quickly, the economic downturn may be over before the stimulus arrives.

HOW WILL IT ALL END? Over the last century, the largest increase in the size of the government occurred during the Great Depression and World War II. Even after these crises were over, they left a legacy of higher spending and taxes. To this day, we have yet to come to grips with how to pay for all that the government created during that era — a problem that will become acute as more baby boomers retire and start collecting the benefits promised.

Rahm Emanuel, the incoming White House chief of staff, has said, “You don’t ever want to let a crisis go to waste: it’s an opportunity to do important things that you would otherwise avoid.”

What he has in mind is not entirely clear. One possibility is that he wants to use a temporary crisis as a pretense for engineering a permanent increase in the size and scope of the government. Believers in limited government have reason to be wary.

The evidence, however, is hard to square with the theory. A recent study by Christina D. Romer and David H. Romer, then economists at the University of California, Berkeley, finds that a dollar of tax cuts raises the G.D.P. by about $3. According to the Romers, the multiplier for tax cuts is more than twice what Professor Ramey finds for spending increases.

Why this is so remains a puzzle. One can easily conjecture about what the textbook theory leaves out, but it will take more research to sort things out. And whether these results based on historical data apply to our current extraordinary circumstances is open to debate.

Christina Romer, incidentally, has been chosen as the chairwoman of the Council of Economic Advisers in the new administration. Perhaps this fact helps explain why, according to recent reports, tax cuts will be a larger piece of the Obama recovery plan than was previously expected.

All these questions should give Congress pause as it considers whether to increase spending to stimulate the economy. But don’t expect such qualms to stop the juggernaut. The prevailing orthodoxy among the nation’s elite holds that increased government spending is the right medicine for what ails the economy.

Mr. Samuelson once said, “I don’t care who writes a nation’s laws or crafts its advanced treaties, if I can write its economics textbooks.”

The coming stimulus bill, warts and all, will demonstrate brilliantly what he had in mind.

N. Gregory Mankiw is a professor of economics at Harvard. He was an adviser to President Bush.