World into the recession: with rich countries dramatically cutting back their consumption and imports, the exports in Asian countries were brought down to its knees. And the credit crunch further exacerbated the problem by making the letter of credit, which is vital to international transactions, harder to get than ever. Now the shippers are offering ZERO shipping rate trying to get their idled ships put into use.

Freight rates for containers shipped from Asia to Europe have fallen to zero for the first time since records began, underscoring the dramatic collapse in trade since the world economy buckled in October.

“They have already hit zero,” said Charles de Trenck, a broker at Transport Trackers in Hong Kong. “We have seen trade activity fall off a cliff. Asia-Europe is an unmit­igated disaster.”

Industry sources said they have never seen rates fall so low. “This is a whole new ball game,” said one trader. 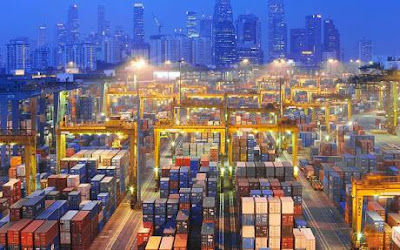 The Baltic Dry Index (BDI) which measures freight rates for bulk commodities such as iron ore and grains crashed several months ago, falling 96pc. The BDI – though a useful early-warning index – is highly volatile and exaggerates apparent ups and downs in trade. However, the latest phase of the shipping crisis is different. It has spread to core trade of finished industrial goods, the lifeblood of the world economy.

Trade data from Asia’s export tigers has been disastrous over recent weeks, reflecting the collapse in US, UK and European markets.

Korea’s exports fell 30pc in January compared to a year earlier. Exports have slumped 42pc in Taiwan and 27pc in Japan, according to the most recent monthly data. Even China has now started to see an outright contraction in shipments, led by steel, electronics and textiles.

A report by ING yesterday said shipping activity at US ports has suddenly dived. Outbound traffic from Long Beach and Los Angeles, America’s two top ports, has fallen by 18pc year-on-year, a far more serious decline than anything seen in recent recessions.

“This is no regular cycle slowdown, but a complete collapse in foreign demand,” said Lindsay Coburn, ING’s trade consultant.

Idle ships are now stretched in rows outside Singapore’s harbour, creating an eerie silhouette like a vast naval fleet at anchor. Shipping experts note the number of vessels moving around seem unusually high in the water, indicating low cargoes.

It became difficult for the shippers to obtain routine letters of credit at the height of financial crisis over the autumn, causing goods to pile up at ports even though there was a willing buyer at the other end. Analysts say this problem has been resolved, but the shipping industry has since been swamped by the global trade contraction.

The World Bank caused shockwaves with a warning last month that global trade may decline this year for the first time since the Second World War. This appears increasingly certain with each new batch of data.

Mr de Trenck predicts Asian trade to the US will fall 7pc this year. To Europe he estimates a drop of 9pc – possibly 12pc. Trade flows grow 8pc in an average year.

He said it was “illogical” for shippers to offer zero rates, but they do whatever they can to survive in a highly cyclical market.

Offering slots for free is akin to an airline giving away spare seats for nothing in the hope of making something from meals and fees.