This recent report from Telegraph of China's worry that the US is going to inflate away its debt:

Richard Fisher, president of the Dallas Federal Reserve Bank, said: "Senior officials of the Chinese government grilled me about whether or not we are going to monetise the actions of our legislature."

"I must have been asked about that a hundred times in China. I was asked at every single meeting about our purchases of Treasuries. That seemed to be the principal preoccupation of those that were invested with their surpluses mostly in the United States," he told the Wall Street Journal.

His recent trip to the Far East appears to have been a stark reminder that Asia's "Confucian" culture of right action does not look kindly on the insouciant policy of printing money by Anglo-Saxons.

What struck me most about China

Fortune’s impression about China: the massive, massive infrastructure build-out, the biggest in the history of humanity.

The fast growing Chinese economy posts many challenges to the world. One of such is pollution. In 2002 during his visit to Baylor University, I asked Robert Fogel, the Nobel-winning Chicago economic historian, about his view on China’s pollution problem. His answer was startlingly simple —Just compare today’s China to Chicago in the early 20th century: Chicago back then was a fast growing dirty butcher town and transportation hub, and now look at what Chicago has become.

The message conveyed in Fogel’s simple answer is two fold: 1) for poor countries, the concern over economic development naturally dominates the concern over environment; 2) Chinese will have the greatest incentives to cure their pollution problem once they realize this can’t go on forever. For this matter, I always think China will come out as the world leader in energy efficiency innovation. Why? China faces the gravest energy challenges so the greatest pressure to innovate and break through in energy-saving technology. What will push such innovation to happen faster is crisis. Yes, I do think China needs (and possibly will have) multiple mini energy crises to make this pressure even greater. But I am optimistic.

Can "green shoots" save "zombie banks"?

Why China is so worried about the Dollar?

In this short YouTube video, Milton Friedman explains why the US has been so attractive to investors worldwide in the past; and under what condition such appeal may disappear.

I also made a chart a couple of months ago summarizing China’s recent effort starting to use its own currency, Renminbi, in international trade and signed numerous currency swap agreements with a bunch of countries. And China and Brazil are in a similar talk recently.

I don’t think for these actions China aims to replace the dollar. What Chinese government really worries about is their huge dollar-denominated asset holdings (70% of nearly $2 trillion foreign reserves) may lose value big time if the dollar drops precipitously in the future.

With economic recovery around the corner, the US should stop its money printing machine. “Ignore it at your own peril”—the US may well be on its path to destroy its economy and its reputation among countries. Watch this classic Friedman 1980 video on inflation, “Inflation is just like alcoholsim. In both cases, when you start drinking, or you start printing too much money, the good effect comes first, and the bad effects only come later. That’s why in both cases, there is a strong temptation to overdo it: to drink too much and to print too much money…”

Government and politicians have a tendency to use inflation to get out of their debt problem. Call it “debt monetization”. Here is a great chart from Casey’s Chart. 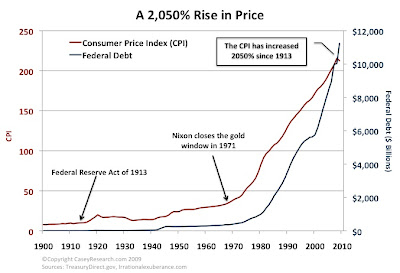 “The costs of things as measured by the consumer price index have risen twentyfold since the Federal Reserve Act of 1913. This act empowered the central bank to create and control a new currency for the United States, the Federal Reserve Note. Over this same period, the federal deficit soared from $2 billion to over $11 trillion. Coincidence? We think not.

After President Nixon cut the dollar’s ties to gold, funding the whims of government was no longer burdened by the need for higher taxes. Now any gaps in the budget can be filled by simply printing more dollars. And as you can see, the politicians didn’t hesitate to meet the challenge. Price levels and federal debt have risen hand-in-hand ever since.

The hidden tax of inflation has been stealing people’s buying power for nearly a century, but the opportunity to profit from it only comes about once every generation…”

US and global higher education boom

Following my previous post on China’s higher education boom/bubble, here I share with you another interesting research by Harvard labor economist Richard Freeman on how the global boom of higher education, especially in developing countries, has impacted on the US. 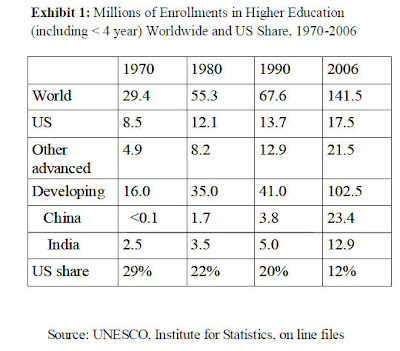 A lot of college graduates from developing countries, seeking better opportunities, came to the United States. The chart below shows you the major source countries of international students in the US. 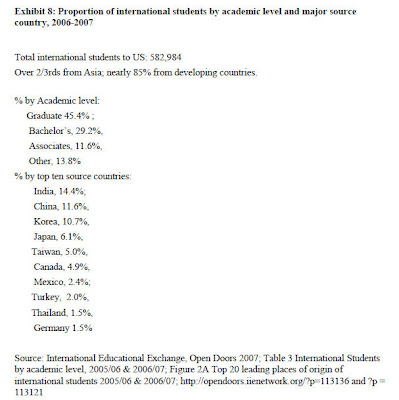 Focus on China: The number of students who came to the US to study and eventually got their PhD degrees in natural sciences has been rising sharply, especially after 1990s. (see graph below; the following graphs were taken from another NBER research by Bound, Turner & Walsh) 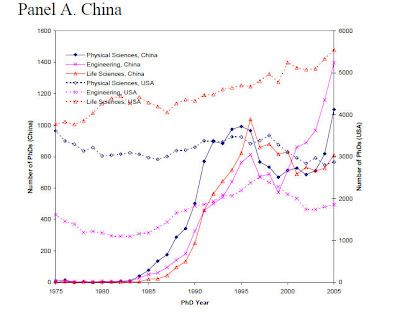 Meanwhile fewer and fewer US-born college graduates went to pursue PhD degrees. This is especially true in life sciences and physical sciences. I am not quite sure how this happened: it could be due to the education problem in US high school system; it could also be higher pay in other sectors, such as financials and investment banking. 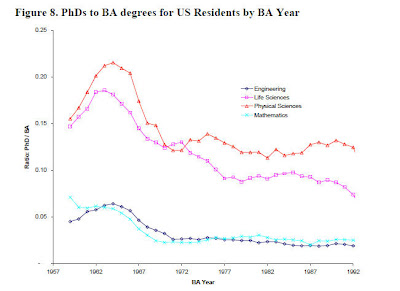 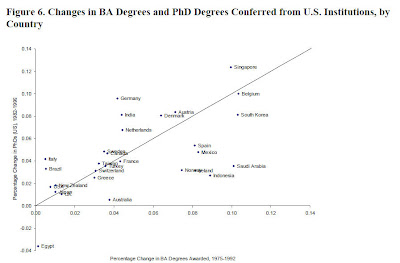 Also, we have witnessed a cross-board surge of international students, almost in every field, not only in the science and engineering field.

With more and more PhD degrees granted to international students, foreign-born researchers and academics are sure to play a more and more important role in US higher education and research in coming years. A policy question naturally rises as to how to retain these foreign researchers. And what changes in US immigration policy should be in place to acheive the goal?