A very nice (and funny) video on the evolution of the federal debt (different from national debt, which includes debts from the states and private debt). According to the video, Obama administration will be increasing the federal debt at “174 mph”, almost tripling the speed of Bush Administration. No wonder Bill Gross is worrying about the US government may lose AAA rating.

Debate on US inflation prospect

A nice debate on inflation from Bloomberg video.

Arguments for deflation or inflation is not to worry:
>excessive capacity and output gap;
>debt deleveraging;
>rising unemployment;

Arguments for inflation (some are my own arguments):
>the Fed put too much money into the system, once economy recovers, the excess liquidity is hard to reverse and money velocity will snap back very quickly;
>the Fed is getting out of its normal monetary policy areas and widely engaged in credit expansions. This may comprise the Fed’s independence and the Fed may face pressure from the Congress not to raise rates giving rising unemployment rate, which is forecast to surpass 10%;
>the temptation of using inflation to erode debt (or monetizing debt);
>a divergence may appear: a slow gradual recovery in the economy (stagnation), and sharp rising of commodities prices, including oil (partly pushed up by vast energy needs in the faster growing emerging markets, especially China), leading to the 70s-like “stagflation”.

Bill Gross: The US could lose AAA rating

Stimulating economy without concern over long-term fiscal budget won’t go long forever. This even applies to the US, which has retained its AAA rating on government debt since WWI. Report from Reuters:

Bill Gross, manager of the world’s biggest bond fund, warned on Thursday the United States will eventually lose its top AAA credit rating, a fear that had already spooked financial markets on Thursday and could keep the dollar, stocks and bonds under heavy selling pressure.

The United States will face a downgrade in “at least three to four years, if that, but the market will recognize the problems before the rating services — just like it did today,” Gross told Reuters.

Gross, the co-chief investment officer of Pacific Investment Management Co. and manager of the Pimco Total Return Fund, which has $154 billion in assets, earlier had told Reuters via email that market declines on Thursday were due to investor fears that the United States is “going the way of the UK — losing AAA rating which affects all financial assets and the dollar.”

Standard & Poor’s on Thursday lowered its outlook on Britain to “negative” from “stable,” threatening the nation’s top AAA rating. Britain faces a one in three chance of a ratings cut as debt approaches 100 percent of gross domestic product.

There is also a video interview on this from CNBC:

According to Bank of Finland:

Foreign direct investment inflows into China declined 21 % y-o-y during January-April. The $6 billion FDI inflow for the month of April translated into a decrease of 23 % y-o-y. Although the contraction from the start of the year appears dramatic, it actually represents a return to more typical levels. FDI inflows were massive in 2008, reaching $108 billion for the year. In the first four months of this year, investments are actually beating the same period in 2007.

More tellingly, the number of projects under implementation has declined each year over the past four years. On the other hand, the average size of a project was growing until the start of this year. Nominally, foreign investment in China is relatively small, representing a mere 7 % of total investment annually. Hong Kong is the largest provider of FDI (about 46 %), and its relative contribution has increased sharply as other countries (including tax havens) have pulled back from investment in China. Combined EU and US investments represent less than of 10 % of total foreign investment at the moment. 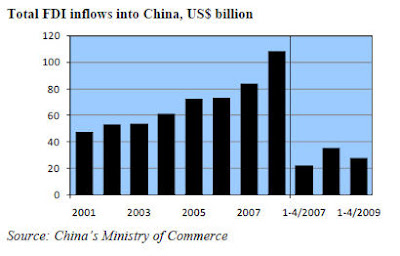