Milton Friedmans’ monetary model and his famous line that “inflation is always and everywhere a monetary phenomenon” are known to many people, but one another hypothesis from Milton on business cycle rarely caught people’s attention.

The so called “plucking model” hypothesizes that the farther you pull it (the economy), the more forcefully it snaps back. Translated into plain English and apply it to business cycle theory, it indicates the sharper the economic downturn, the faster the recovery will be (a.k.a., V-shaped recovery).

The recent empirical research seems to validate such view. And we also tend to observe such pattern in employment recoveries in the pass recessions (see picture below). 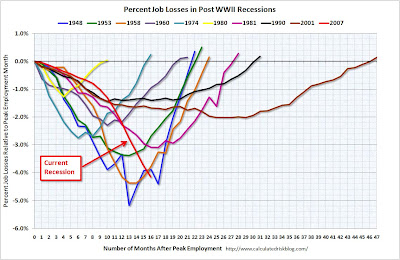 Many people argue (e.g. Paul Krugman) that the unemployment in this recession will probably follow the pattern in 1991 and 2001 recessions, i.e. the employment recovers in a very slow pace, leading to the so-called jobless recovery. But if we look at the graph above carefully, the job losses in 1991 and 2001 recessions were also two of the shallowest. So does this indirectly validate Friedman’s view: the less severe the economic downturn, the slower the employment recovers??? Vice versa?

Anyway, if Friedman’s “plucking” hypothesis were true, we are likely to see both investment and employment come back pretty quickly this time around.

(A word of caution: Every recession is different. Given the uniqueness of the great deleveraging and how hard the financial sector was hit in this recession, I am still skeptical that a quick V-recovery is the likely scenario. But I am open minded. I certainly hope I was wrong. )

One last word: these days, we are filled with all kinds of alphabetical predictions: V, W, U, or L, you name it. Now sounds if we haven’t had enough, Jeremy Grantham of GMO, in his most recent investment newsletter, came out another possible scenario: the VL-shaped recovery, i.e., a V-recovery initially then the economy falls back to a long anemic growth path, which he calls Very Long (VL) Recovery. It’s quite an interesting analysis. You can read his newsletter here.

I can hardly see how the gender wage gap can be explained by differences in productivity levels. The only conclusion is gender discrimination still exists in today’s workplace. The positive news is the gap has been shrinking: in 1980, the gap between male and female was 36%; in most recent 2008 data, the gap reduced to 20%.