Why individual investors sit tight on their 401(k)s?

Part of it is individual's strong belief of the theory that stocks always outperform other assets in the long run; part of it is simple inertia (source: WSJ):

There are bears. There are bulls. And there are sitting bulls. 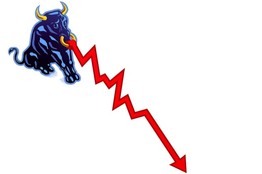 Fidelity Investments, 15% still have every penny in their 401(k) invested in stocks, including 14% of those between the ages of 60 and 64.

The sitting bulls present a problem for hedge-fund managers and other professional investors who have argued that all it would take to shake individual investors' grip on stocks was a good old-fashioned bear market.

To be sure, the share of U.S. households that own stocks in any account has fallen from 53% in 2001 to around 45% in 2008, according to the Investment Company Institute and the Securities Industry and Financial Markets Association. Since 2007, 401(k) investors at both Fidelity and Vanguard have lowered the rate of new contributions they are putting into stocks.

But those trends hardly constitute a stampede. At Vanguard, says Stephen Utkus of the Vanguard Center for Retirement Research, only 16% of 401(k) investors made any trades in 2008, barely up from 15% in 2007 and down from 20% in 2004. That includes rebalancing across funds to restore an asset mix to target levels.

"It is kind of striking," Mr. Utkus says. "We had the most drastic market decline since the Depression, we nearly had a total collapse of the global financial system, and all that caused most people not to do much at all."

After the Great Crash of 1929, individual investors abandoned the stock market for a generation. What keeps today's sitting bulls from running off?

First, these people are largely doing what they have been told, by researchers who have argued that stocks are risk-free in the long run, by mutual-fund companies that earn higher fees on stock funds and by stock-market advocates in the financial media.

Another factor is what Mr. Utkus calls the "contribution effect." For workers who are young, newly hired or lower-paid, falling market values are counteracted by the new cash pumped in with each payroll contribution. More than one-third of Vanguard's 401(k) investors didn't lose money in 2008, while another 10th lost 10% or less. These people were barely scathed by the stock-market crash.

Furthermore, 401(k) contributions are automatic and withdrawals are often decades in the future, reducing the apparent need for action today. Sir Isaac Newton's first law of motion might be reapplied to 401(k) investing: An investor at rest tends to stay at rest, even when acted upon by an unbalanced force.

This bovine behavior is driven partly by a very human need to simplify decisions that feel complex. Forced to choose how much money they want to put into stocks, many 401(k) investors don't treat it as a decision about how much risk they wish to take. Instead, they look for obvious rules of thumb. If you like stocks, why not put 100% of your money into them? If you don't, then why not set a zero allocation to stocks? And once you pick a nice round number, why change it?

Accounting professor Shlomo Benartzi of UCLA studied a large sample of investors who filled out a risk-tolerance questionnaire for a major 401(k) provider. Only 7% described themselves as aggressive; yet 33% invest as if they are, putting 80% to 100% of their 401(k) into stocks.

So inertia is often a state of mind, rather than a deliberate choice. It worked well in the 1980s and 1990s, and again over the past six months as the market partially rebounded from its collapse. For the past decade as a whole, it hasn't worked well. So investors should be patient, but not catatonic; they should rebalance annually to sell some of what has gone up and buy some of what has gone down.

If stocks are halved again, or we get another decade of poor returns, the sitting bulls might finally get up and leave the field. But nothing short of that seems likely to make them budge. Bears can maul most livestock, but they are no match for sitting bulls.