Becker: How much should we care about budget deficit

Insights from Nobel winning Gary Becker, professor of economics at University of Chicago:

Deficits arise when government spending exceeds the revenues raised from various taxes. Deficits add to the stock of government debt. In evaluating the consequences of deficits for an economy, it is first of all crucial to know whether the source of a larger deficit is greater government spending or reduced tax collections, possibly due to reductions in tax rates. The second issue is the burden to the economy of financing the interest payments due on the government debt. I take these issues up in turn.

To the extent that the source of the rise in a deficit is increased government spending, then whether that rise is justified depends on how socially valuable are these government expenditures. By that I mean the social rates of return on these expenditures, such as longer lives for the elderly, relative to the interest cost of raising the required funds, and relative to the returns on other investments in the economy. Much of the increased government spending in different countries during this recession went to help out banks that were in danger of going under. While numerous mistakes were made that will be argued about for a long time, such spending on the whole was necessary in order to limit the financial crisis that had developed.

Other parts of the increase in spending in most countries are far more dubious and may even have harmed their economies. I include in that most of the $800 billion Obama stimulus package, much of which is still not spent even though the brunt of the recession is over This package was promoted as a way to fight the recession, but mainly it is an attempt to re-engineer the economy in the directions of larger government favored by many liberal Democrats. I believe much of this reengineering will hurt the functioning of the economy, and of course at the same time will add to the debt burden.

A very small example was the cash for clunkers program in the US that ended a short time ago. The 19th century French essayist Frederic Bastiat discussed facetiously the gain to an economy when a boy breaks the windows of a shopkeeper since that creates work for the glazier to repair them, and the glazier then spends his additional income on food and other consumer goods. The moral of that story is to hire boys to go around breaking windows! The clunkers program was hardly any better than that (see our discussion of the clunkers program on August 24th).

Deficits also arise automatically during recessions because tax revenues fall as the growth in aggregate incomes slows down, and even becomes negative, as it did during this recession. This automatic effect on deficits during recessions from falling tax revenues is supposed to be balanced by automatic surpluses during prosperity times as tax revenues grow because income are expanding faster. Unfortunately, the period prior to the recession also had budget deficits, even though incomes grew quite fast, because Congress and President Bush pushed for greatly expanded spending.

To turn to the second question, will financing the debt become a serious obstacle to rapid US growth as the current and projected sizable US deficits increase the ratio of government debt to American GDP? That depends on four critical variables: the size of the debt/GDP ratio, the level of interest rates, tax rates, and the rate of productivity growth in the American economy. Suppose the debt held by the public-which excludes government debt held by other government agencies- reaches 100% of present or near term GDP, which is not unlikely.

The burden on the government budget that this imposes depends on the interest rates on the debt. At an average interest rate of 5%, that means 5% of GDP would go to servicing the debt, which is a little less than 20% of total federal government spending. This might be manageable but it is not trivial. On the other hand, if average interest rates were only 3%, servicing costs would be far more tolerable. In fact, the US has been paying about 3% on its debt, so even a considerable increase of the debt to 100% of GDP would still be manageable. But if the Fed starts raising real interest rates to head off the inflation potential in the $800 billion of excess reserves, the debt burden could become a major problem. Another factor is the savings rates coming from the Asian countries, like China. If their savings decline sharply, that too would raise world interest rates and increase the debt burden for all countries.

Rapid productivity growth and an improved tax structure could save the situation because the expansion of GDP caused by such growth and better taxes lower the ratio of the debt to GDP, and makes financing the debt easier. To maintain rapid productivity growth requires that an economy provide powerful incentives to invest in physical and human capital and R&D. It also requires that Congress and other legislatures do not start growing government spending as GDP grows rapidly. But members of Congress and other legislatures are tempted to use much of the growing tax revenue on their pet projects.

One important determinant of the incentives to invest is the tax rates on the rewards of investments in new knowledge and capital. Rich people should pay a larger share of the tax burden, and they do. However, if the emphasis changes from encouraging investments to redistribution, the poor as well as the rich will suffer. Probably the poor will suffer more since the rich can more their capital and themselves to the many low tax jurisdictions in the world.

Roach: Prevent the next crisis

The Dollar is breaking…(at this moment)

Dollar is breaking to new lows…if we don’t repeat another Lehman this fall, I don’t see how it can go up. 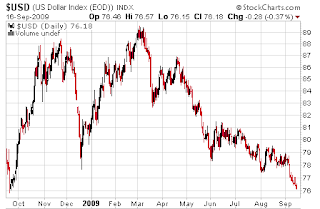 Gold price jumped above $1000, and stayed there quite nicely. 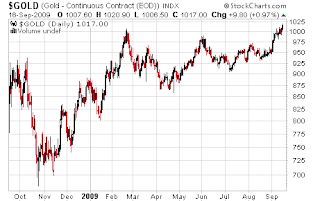