China to become the global center for auto design

It’s amazing to read this piece…thinking about it in a global macro context: Japan suffered two decades of stagnant growth; the US just barely emerged from the worst crisis in a century; while China has emerged as the No. 1 car market in the world. The world is fast changing, indeed. (source: WSJ)

BEIJING — A decade ago, in search of inspiration for an ultra-luxurious Mercedes-Benz, designer Olivier Boulay studied Japan’s chauffeur-car culture.

Now, as he dreams about the future of the automobile, he zips around the streets of Beijing on a $367 electric bike, along with throngs of the city’s residents.

“China is the perfect place to think about the future shape of mobility,” said Mr. Boulay, the 52-year-old design chief for Daimler AG’s Mercedes-Benz unit in China, who moved to Beijing from Tokyo this year. “It’s my job here to push my staff to push the envelope and think about the global automotive future from Beijing.”

Mr. Boulay reflects a profound shift taking place in the car industry. As the Chinese car market expands, global auto makers increasingly are making design decisions in China. The result is that consumer trends in China are being felt in models sold around the world. 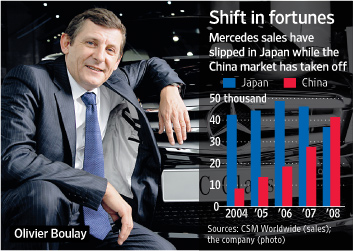 Car makers from General Motors Co. to Volkswagen AG to Toyota Motor Corp., are pouring resources into China, which displaced Japan as the world’s second-biggest auto market a few years ago and is now poised to surpass the U.S. this year as the world’s biggest.

The consequences are on stark display at the Tokyo auto show, which runs through Nov. 4. Regular exhibitors including Mercedes-Benz, GM, and Hyundai Motor Co. from neighboring South Korea all stayed home this year.

After emerging from bankruptcy protection in July, GM located its international headquarters in Shanghai, where it has a flagship joint venture with Shanghai Automotive Industry Corp. And Ford Motor Co. recently decided to move its Asia-Pacific head office to China from Bangkok.

GM already has three global vehicles designed with China-inspired features: the Buick LaCrosse and Regal and the Chevy Cruze. The LaCrosse emerged from a concept car called the Invicta GM developed by GM’s design studios in Shanghai and Warren, Mich.

The LaCrosse’s interior is splashed with light and warm colors. The wood grain on the steering wheel and dash blend in almost imperceptibly with the seat leather, a nod to the Chinese, who are used to monotone color schemes.

In China, global auto makers are pondering not just the next model cycle in four or five years but also the shape of cars 10 to 15 years down the road.

“China is a very important pillar for Daimler and its global strategy,” said Ulrich Walker, chairman and chief executive of Daimler Northeast Asia, who is overseeing Mercedes-Benz ‘s expansion in China.

Japan is now the eighth-biggest market for Mercedes-Benz, slipping from sixth place three years ago. China has become the brand’s fourth-largest market, compared with 10th in 2006.

China is one of the biggest markets for the top-of-the-line S-Class sedan, whose redesigned model was launched in China earlier this year after significant input from Chinese consumers. Mercedes even flew some of its customers and those of competitors to Germany to see early prototypes.

While China accounts for only about 4% of overall Mercedes sales, customers around the world are seeing features the Chinese like: bigger, limousine-like back seats with more-advanced entertainment and climate-control systems, among other amenities. In China, many upscale buyers have chauffeurs and drive on their own only on weekends. Such customers also are generally in their 30s and 40s — much younger than elsewhere. They prefer light-colored interiors, such as tan, not the somber blacks and grays often preferred in other regions.

Mr. Boulay’s arrival in Beijing illustrates China’s rise. A Frenchman by birth, he had spent 17 years in Japan, where in the late 1990s, as head of the Mercedes design studio in Tokyo, he styled the car maker’s ultra-luxurious Maybach sedan.

In Beijing, he wants to soak in the country’s new fascination with electric-powered bikes and cars to develop concepts for future Mercedes global products, including a luxury electric vehicle. His advance-design center is one of five that Mercedes operates around the world.

Mr. Boulay is especially fascinated with how ordinary Chinese people embrace e-bikes for daily transportation, and the way the country’s governments at all levels are prompting a rapid adaptation of all-electric battery cars and plug-in hybrids.

“You can see how a new generation of consumers in this country is way out in front,” said Mr. Boulay.

He believes the shift to electricity opens up new possibilities for designers to be more creative because of the simplicity of fully electric cars, which need neither bulky engines nor transmissions. Some companies such as Japan’s Nissan Motor Co. are experimenting with round, cartoon-like electric pod cars with no hoods or trunks.

“We want to use China as leverage to push ourselves,” he said. “That’s why I am here and why we are setting up an advance design studio-just like we did years ago in Japan.”

← Financial deregulation to the extreme Why industrial revolution happened in Britain? →