By Paul Deng in Uncategorized on February 2, 2010. 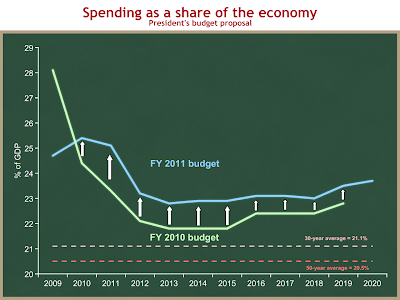 This may be inevitable after a big financial crisis and government stimulus is badly needed. But big government deficit will have its consequences.

From Carmen Reinhart and Kenneth Rogoff:

As government debt levels explode in the aftermath of the financial crisis, there is  growing uncertainty about how quickly to exit from today’s extraordinary fiscal stimulus. Our research on the long history of financial crises suggests that choices are not easy, no matter how much one wants to believe the present illusion of normalcy in markets.
Unless this time is different – which so far has not been the case – yesterday’s financial crisis could easily morph into tomorrow’s government debt crisis.In previous cycles, international banking crises have often led to a wave of sovereign defaults a few years later. The dynamic is hardly surprising, since public debt soars after a financial crisis, rising by an average of over 80 per cent within three years. Public debt burdens soar owing to bail-outs, fiscal stimulus and the collapse in tax revenues. Not every banking crisis ends in default, but whenever there is a huge international wave of crises as we have just seen, some governments choose this route.

We do not anticipate outright defaults in the largest crisis-hit countries, certainly nothing like the dramatic de facto defaults of the 1930s when the US and Britain abandoned the gold standard. Monetary institutions are more stable (assuming the US Congress leaves them that way). Fundamentally, the size of the shock is less. But debt burdens are racing to thresholds of (roughly) 90 per cent of gross domestic product and above. That level has historically been associated with notably lower growth.While the exact mechanism is not certain, we presume that at some point, interest rate premia react to unchecked deficits, forcing governments to tighten fiscal policy. Higher taxes have an especially deleterious effect on growth. We suspect that growth also slows as governments turn to financial repression to place debts at sub-market interest rates.

I don’t think there will be a debt crisis, but certainly expect rising yields on government bonds and further weakening US dollar.

← "The British screwed us", says Paulson How to destroy American jobs →