Making money too cheap carries danger. First, it fueled the housing bubble. Now, counterintuitively, it may be crimping an economic revival. That wasn't the plan. By cutting rates to near zero, the Federal Reserve helped forestall economic collapse. Yet with the recovery flagging, some worry that super-loose monetary policy may actually turn the Fed into an agent of deflation.

At issue is why banks aren't lending, especially to small businesses that are the engine of growth. One answer is there isn't demand for loans. Clearly, that is a factor. A lack of loan supply, though, also may be playing a role—and not just because credit risk is high.

Ronald McKinnon, a Stanford University economics professor, argues that near-zero rates gum up the interbank market, which crimps lending growth. He reasons that bigger banks aren't lending to smaller ones because the derisory yield on offer doesn't compensate them for lending to potentially risky counterparties. That is a particular problem, he says, because many small businesses borrow through lines of credit. Banks won't extend these unless they know they can tap the interbank market at a later date. The amount of inter-bank loans outstanding was about $160 billion at the end of May, down 60% in a year, according to Fed data. 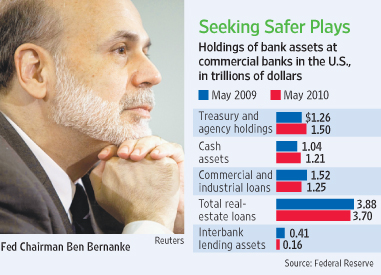 The result is a scarcity of loan supply, says David Malpass, president of research firm Encima Global. "Banks claim that there's a lack of demand, but it's a two-way street."

Banks, meanwhile, are trimming lending more broadly and hoarding funds. Their May holdings of Treasury and other government-backed debt rose 19% compared with a year earlier, Fed data show. Commercial and industrial loans fell 18%.

Smaller companies have been hit hardest. In the first quarter, debt outstanding for small businesses fell by about $70 billion, according to Fed data, even as larger companies saw debt increase by $100 billion.

The reluctance to lend is understandable. Banks can borrow cheaply and earn a handy profit investing in higher-yielding, government-backed debt, in what is known as the carry trade. That contrasts with the impact of near-zero rates on investors, who were pushed into riskier assets by the pain of no yield on cash.

Making money more expensive would risk harming the economy as some companies and individuals paid more on their floating-rate debt. But it could feasibly compensate banks to lend more in the interbank market. Meanwhile, banks would face shrinking profits from their safe carry trade, potentially encouraging them to seek higher returns from traditional loans.

In that case, "raising rates could actually have an inflationary impact," says Joseph Mason, a finance professor at Louisiana State University.

Even today's experimental Fed is unlikely to embrace such an unorthodox approach. But the central bank needs to consider the unintended consequences of its super-aggressive monetary policy.