According to WSJ, Brazil appears to be waving the white flag in the currency war.  After months of tough talk to speculators and other governments driving up the Brazilian real, Finance Minister Guido Mantega seems resigned to the fact that there is little he can do to contain the currency's meteoric rise.

The currency climbed through a key barrier of 1.60 per dollar Thursday, a day after Mr. Mantega unveiled the latest in a string of controls designed to slow the real's climb. It was trading at 1.59 to the dollar late in the day, up more than 40% since late 2008. 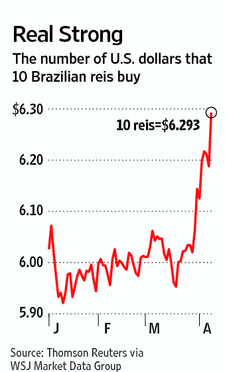 Brazil imposed a tax on capital inflow last year.  But that seemed not working very well. Capital continues to flow in due to the very large interest rate differential and a robust economic growth partially driven by the commodity boom worldwide.

When one country raises interest rate to contain inflation, while capital control is absent, it simply invites more capital inflows, which could drive up inflation further.  This is why Brazil is giving up.

IMF has long been an opponent of capital controls.  But it reversed its position recently and is more willing to consider capital control as a policy option.

← China’s central bank gaining credibility Stephen Roach: the US economy is on steroids →