In 2009, there was a heated debate with regard to how strong the recovery will be.  There were many guesses: L-shaped, V-shaped, you name it; the funniest one was a "root-square" recovery, meaning an initial rebound then followed by anemic growth, or the economy goes sideways.   Now in hindsight, this seemingly funny root-sq analogy is probably the most accurate way to describe the current state of the recovery.

John Taylor compares the current recovery to the one after the deep recession in 1981-82.  See the graph below.  A real V-shaped recovery would mean GDP growth in the range of 7-8%. 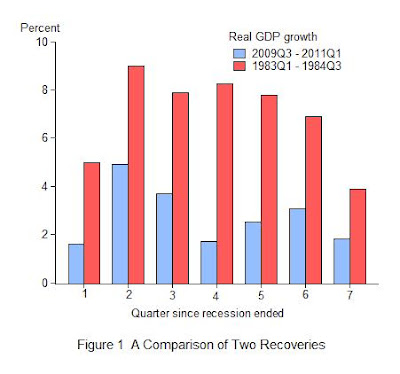 The current recession-recovery also invalidates Milton Friedman's famous hypothesis that the deeper recession is, the stronger the recovery will be — the so-called "plucking" model.

I am deeply troubled by Bernanke's recent talk that QE3 may be in the pipeline.  If QE2 has no effect at all, why bother with another round of QE?  This is an exciting time for economists to come up with new theories.  I personally think the most promising area is to integrate financial market (esp. credit boom and bust) with the real economy.  The traditional approach seems to believe there is a clear separation between the two.

← Home: a lousy investment QE3 is coming – some investment strategies →