Milton Friedman years ago suggested to get rid of central banks…Alan Greenspan, the Maestro, and his legacy will be and is already being reevaluated.

Justin Larhart of WSJ looks at Central’s role in financial crises. Also, be sure to read John Taylor’s recent criticism on the Fed’s policy missteps that exacerbated this crisis. 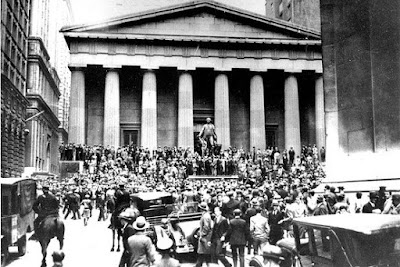 Since the beginning of the financial crisis in 2007, the Federal Reserve has come to the rescue so many times that even seasoned central-bank watchers have trouble keeping track.

It has injected more than $1 trillion into the financial system. It has backstopped corporate short-term lending. It has cut its overnight target rate from 5.25% in August 2007 to between zero and 0.25% — the lowest level in the Fed’s 95 years. Since it can’t lower rates any more, it has begun effectively to print money in an attempt to bolster the economy.

But its actions don’t seem so extraordinary from the perspective of three centuries of central-banking history. Central banks have been built on financial crises, with each major tremor expanding their role. And today’s economic convulsions foreshadow more changes to come at the Fed.

If it wasn’t for crises, central banks might not exist. In Britain, after years of civil war and the ouster of King James by William III in 1688, the country’s public finances were in tatters, with tax collection falling short of what the government needed to pay its bills and lenders unsure about the stability of the government. The Bank of England, one of the first central banks and for centuries the most important one, was founded in 1694 to purchase government debt and curtail the funding crisis.

The establishment of the Bank of England came at the beginning of a great societal shift, when new ideas were challenging old doctrines, and rising world trade was giving new power to merchant classes. But the expansion in commerce and banking also made financial crises more prevalent. Speculative bubbles led to spectacular market crashes.

“The Bank of England received heavy criticism in many of the crises of the 19th century when it didn’t act fast enough,” says Rutgers University economic historian Michael Bordo. “It learned to be lender of last resort.”

As laid out by the 19th-century economic writer Walter Bagehot, the bank’s role as lender of last resort was to lend freely against any sound collateral during financial crises, but to lend at higher-than-market rates to prevent borrowers from becoming over-reliant on the bank. It was a lesson that other central banks, such as the Bank of France, also came to learn.

But for much of the 19th century and into the 20th, the U.S. had no central bank. Many Americans feared that nothing good could come from one bank wielding so much power. In 1816, a central bank to help fund government finances that had been badly depleted by the War of 1812 was established. In his 1832 veto of the extension of the bank’s charter, President Andrew Jackson wrote that “Great evils…flow from such a concentration of power in the hands of a few men irresponsible to the people.”

While financial crises in England diminished through the 19th century, they were a regular feature of American life.

“Crises are much more frequent when we don’t have a central bank,” says New York University Stern School economic historian Richard Sylla. With nobody willing to step into the fray when borrowers ran into trouble, small credit-market problems could easily spin into major ones.

The turning point came in 1907. The availability of credit was tight throughout the world that year, and that October, a speculative attempt to corner the stock of United Copper Co. failed. That sparked a run on the deposits of Knickerbocker Trust Co., which had helped fund the scheme, eventually leading to the firm’s collapse. John Pierpont Morgan, the giant of American finance, took on the role of lender of last resort.

Struggling with a bad cold, sleep-deprived and sustaining himself with little more than cigars, Morgan put up millions of his firm’s money to avert the crisis and cajoled other bankers into doing the same. In a famous incident, Morgan gathered a throng of bankers and trust executives in his library on the evening of Nov. 3, locking the doors and not opening them until 4:45 the next morning, after the men had agreed to take part in a $25 million loan.

The Panic of 1907 helped push aside longstanding worries over the economic power concentrated in an American central bank, and in 1913 the Federal Reserve Act was passed.

The Fed flunked its first big test when it didn’t adequately respond to a series of banking panics that began shortly after the 1929 stock-market crash, helping to precipitate the Great Depression. As an academic, current Fed Chairman Ben Bernanke’s area of expertise was the Great Depression. One reason that the Fed has slashed interest rates so deeply in response to the current crisis is that it doesn’t want to repeat the mistakes it made in the 1930s.

The big mistake, economists Milton Friedman and Anna Schwartz have argued, wouldn’t have happened if it hadn’t been for the untimely death in 1928 of Federal Reserve Bank of New York President Benjamin Strong. A disciple of J.P. Morgan’s, Mr. Strong would have led the Fed to ease monetary policy more quickly, they argue.

The Great Depression experience led central bankers to expand their role once more. It was no longer enough to be a backstop against financial panic; they now moved toward using monetary policy to fight back economic downturns on the one hand and prevent inflation on the other — a role that became more important at the Fed after the inflationary crisis of the 1970s.

Politicians often prefer rapid economic growth and inflation, since rising prices make it easier to pay down debt. They therefore pressure the Fed to keep interest rates low. But the Fed is reluctant to do that because those conditions can overheat the economy, which eventually leads to a deep downturn. Over the years, the Fed pushed for political independence to give it the latitude to tame the economy’s cycles of boom and bust as it saw fit. It was a shift that took place over years, interrupted during World War II and not bearing its final fruit until Paul Volcker became Fed chairman in 1979. Over many politicians’ objections but with the support of President Ronald Reagan, Mr. Volcker raised rates to stem runaway inflation and recession.

In 1997, after a Labor Party landslide, Britain’s new Chancellor of the Exchequer Gordon Brown (now its prime minister) granted the Bank of England independence. The Bank of Japan was for years under the sway of Japan’s powerful Ministry of Finance. It gained its independence in 1998. The European Central Bank, which was founded in 1998, was designed to be politically independent.

Some worry that that the current crisis will make for a less-independent Fed. “You see the chairman of the Fed standing side by side with the secretary of the Treasury, cozying up to Congress — is that a sign of an independent central bank?” asks Carnegie Mellon University economist Allan Meltzer.

But University of California at Berkeley economic historian Brad DeLong says that the history of central banks and crises has been a steady expansion in their power.

That can be worrisome, notes NYU’s Mr. Sylla. “The central bank is much more powerful, and of course we have to worry about this in a government of checks and balances,” he says.

The big step the banks will take in the wake of the current financial crisis may be to target the excessive risk taking that can lead to bubbles, Mr. DeLong thinks. Indeed, Fed officials appear to be edging in that direction.

So far, Fed officials have argued that raising interest rates to counter risky behavior would hurt not only the speculators, but also the economy at large. Rather than raise rates, they prefer to use regulation to clamp down on excesses, putting in place rules that keep risk at bay. Some economists counter that risk takers will figure out how to skirt regulations, so using interest rates is the best approach.

Either approach — raising rates or regulating — would be a shift from the Fed’s old stance to let bubbles burst of their own accord and clean up afterward. Many critics think that credo led investors to take on too much risk — the Fed would always be there to catch them when they fell, and so they became incautious. If it ends up curbing risky behavior through regulations, the Fed will be trying to prevent the types of crises that always seem to expand its role.