Home » Uncategorized » How many Chinese oversea students have returned home?

How many Chinese oversea students have returned home? 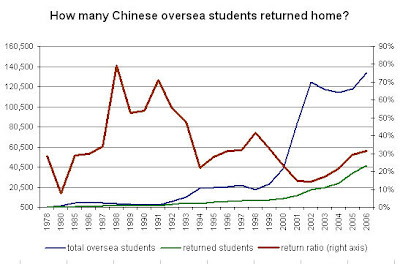 (source: author’s own calculation and China’s National Bureau of Statistics)

There was a huge surge in terms of number of students who chose to go abroad right around the millennium. I suspect this was due to China’s higher education reform and many more high school students were able to go to colleges, and thus it became more difficult for them to find ideal jobs in China after graduation.

Concerning students return ratio, the average ratio for the recent decade was around 25%, and it has been trending higher gradually. However, the recent return ratio is much lower than late 80s and early 90s, which was around 60%.

I am a little puzzled by the two huge drops of the return ratios: one was around early 90s, and the other was around late 90s. The first drop might be the ripple effect of the 1989 incident, but I am not sure.