In 2007, Americans spent $92.3 billion on legalized gambling; but saved only $57.4 billion. This Intelligent Investor piece by Jason Zweig offers some interesting perspective on how to offer “exciting” incentives for Americans to save.

Based on recent headlines, you might think that Americans are finally saving again. Want to bet?

In 2007, the latest year for which final numbers are available, Americans spent $92.3 billion on legalized gambling, according to Christiansen Capital Advisors; that same year, says the U.S. Bureau of Economic Analysis, Americans saved only $57.4 billion.

So, if Americans are to save more, maybe we should make saving feel more exciting than just a dull deposit into a bank account.

The BEA recently estimated that personal saving — what is left of Americans’ disposable income after all our spending — has risen to a 6.9% annual rate. Starting in the late 1980s, the personal-saving rate began to fall from the 8%-to-10% range. By 2005, households were spending 99.6 cents of every dollar they earned. Now, however, frightened by foreclosures and menaced by rising unemployment, Americans are saving almost as much as they used to. 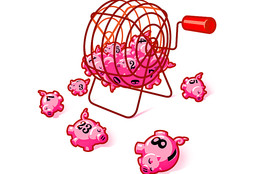 Charles Biderman of TrimTabs Investment Research, an economic-analysis firm in Sausalito, Calif., has studied the saving rate for years. He adjusted for one-time boosts from the stimulus package and used daily income-tax reports from the U.S. Treasury to take the latest job losses into account. By this revised estimate, the saving rate may actually be running as low as 0.9%. (People who have been thrown out of work often can’t save.) A BEA spokesman declined to dispute Mr. Biderman’s adjustments, saying only “TrimTabs has a different method of calculating.”

It makes sense that the saving rate might be lower than it looks; spendthrifts don’t turn into misers overnight. But we would be better off as an economy and as a society if Americans spent less and saved more.

The late, great investment manager Sir John Templeton warned me 20 years ago: “Those who spend too much will eventually be owned by those who are thrifty.” If you wonder how China, Japan, Hong Kong and Taiwan ended up amassing $1.65 trillion in U.S. Treasury bonds, the answer lies largely in our own credit-card bills.

Today, credit cards and online shopping make deferring gratification harder than Ben Franklin ever could have imagined. And Americans are in hock up to their ears, with $10.5 trillion in mortgages and another $2.6 trillion in consumer credit. It isn’t any wonder that saving feels impossible to many people.

But psychologists have long known that people tend to overestimate the odds of rare events. Applying that behavioral insight, finance professor Peter Tufano of Harvard Business School has devised a clever program called “Save to Win.” Launched earlier this year for members of eight credit unions in Michigan, it is a cross between a certificate of deposit and a raffle ticket. Members who put $25 or more into a Save to Win one-year CD are entered into a monthly “savings raffle” for prizes up to $400, plus one annual drawing for a $100,000 jackpot. Only Michigan residents are eligible to participate.

This unusual CD is federally guaranteed by the National Credit Union Administration and pays between 1% and 1.5% annual interest, a bit lower than conventional rates. In 25 weeks, the program has attracted about $3.1 million in new deposits, often from people who have never been able to set money aside.

Takisha Turner, 33 years old, is a dispatcher for the valet-parking department at Greektown Casino in Detroit. Ms. Turner doesn’t gamble, but she has always struggled to save. She had only about $10 in her savings account at Communicating Arts Credit Union when she walked in a few weeks ago and heard about Save to Win.

“The teller said somebody else she told about it won,” says Ms. Turner, “so I said, ‘Well, you must be good luck then.’ I thought it was a good idea, because earning interest means you win anyway. So I put down the minimum, $25.” This past week, Ms. Turner won $400. She plowed the $400 back into her Save to Win account, getting a second shot at winning the $100,000 grand prize.

People love to gamble and hate to save. With Save to Win, says Communicating Arts Credit Union President Hank Hubbard, “You are sort of betting, but there’s no losing.” If we are to become a nation of savers again, we will need more innovations like this — and the regulatory flexibility to allow them.

← Stock market cycles The Economy Is Even Worse Than You Think →