I have planned to send out this earlier, but somehow I forgot. Peter Bernstein, one of the few shining stars in investing, co-founder of Journal of Portfolio Management, and author of nearly a dozen popular investment books, including Against the Odds, passed away in June. Here is a piece remembering him from WSJ (the highlights are mine). I truly enjoyed this piece, and his wisdom.

Investing has yielded a few stars so famous they are known by first name. Warren Buffett is one. Peter L. Bernstein — the economist, investment consultant and prolific author who died on June 5 at 90 — was another.

Mr. Bernstein saw the boom and bust of the 1920s first-hand in New York. In 1929, Mr. Bernstein’s father, Allen, sold the family leather factory “for a price he never dreamed he would get” and put all the proceeds into the stock market, buying “other people’s companies at prices they never dreamed they would see, either,” Mr. Bernstein recalled, paraphrasing his father. 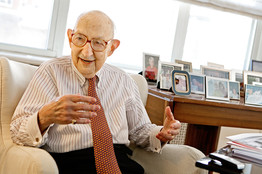 Then the stock market crashed, nearly wiping out the family.

Mr. Bernstein never forgot the lesson. Seven decades later, he wrote: “What we like to consider as our wealth has a far more evanescent and transitory character than most of us are ready to admit.” He urged investors to regard their gains as a kind of loan that the lender — the financial market — could yank back at any time without any notice.

A classmate of John F. Kennedy in Harvard College’s class of 1940, Mr. Bernstein entered finance in 1941, joining the research department of the Federal Reserve Bank of New York.

After the U.S. was attacked by Japan, Mr. Bernstein tried to enlist as a pilot in the Air Force, but his poor eyesight made him ineligible. Instead, he served as an intelligence officer for the Office of Strategic Services in London during the Blitz, where he said he learned mental resilience.

In his almost 70-year career, he taught economics at Williams College, worked as a portfolio manager at Amalgamated Bank and ran the investment-counseling firm of Bernstein-Macaulay, co-founded by his father and Frederick Macaulay, who invented the modern discipline of bond investing.

In 1974, as Wall Street was suffering its worst market decline since 1929, Mr. Bernstein co-founded the Journal of Portfolio Management to improve risk management with insights from academic research.

His introduction to the maiden issue reads as if it were written yesterday: “How could so many have failed to see that all the known parameters were bursting apart?…It was precisely our massive inputs and intimate intercommunication that made it impossible for most of us to get to the exits before it was too late.”

He was the author of 10 books, five of which he published after the age of 75. Two of them, “Capital Ideas,” a history of modern finance, and “Against the Gods,” a dazzling survey of probability and risk, were international best sellers. With his wife and business partner, Barbara Soskin Bernstein, Mr. Bernstein also published “Economics & Portfolio Strategy,” a biweekly newsletter.

Mr. Bernstein generally shunned making black-and-white predictions, but in an interview with The Wall Street Journal in early 2008, he warned that “we are going to have an extremely risk-averse economy for a long time….The people who think we will have turned [the corner economically] in 2009 are wrong.”

Late in his life, Mr. Bernstein often joked that he had made his living for decades by repeatedly “telling people what they know only too well already.”

In 1970, he asked rhetorically, “What are the consequences if I am wrong?” and said “no investment decisions can be rationally arrived at unless they are [based upon] the answer to this question.” He counseled investors to take big risks with small amounts of money rather than small risks with big amounts of money.

The same focus on the consequences of error was one of the main themes of “Against the Gods,” which he published more than a quarter-century later.

Also in 1970, Mr. Bernstein wrote: “We simply do not know what the future holds.” Over the ensuing decades, he returned again and again to that phrase in his speeches, articles and books, because he felt it captured the central truth about investing.

Asked in 2004 to name the most important lesson he had to unlearn, he said: “That I knew what the future held, that you can figure this thing out. I’ve become increasingly humble about it over time and comfortable with that. You have to understand that being wrong is part of the [investing] process.”