How to make our regulations smarter and more intelligent by utilizing psychology to shape human behaviors (source: Intelligent Investor of WSJ):

A key component of President Obama's financial-reform package is its proposed Consumer Financial Protection Agency, which would apply findings from the science of human behavior to ensure "transparency, simplicity, fairness, and access" for borrowers, savers and other financial consumers.

That could make it a lot harder for a part-time worker to end up with an exploding mortgage that eats all her take-home pay. It might even mean that regulators will finally pay attention to the visual presentation of financial data — color, graphics and other factors that exert powerful sway over your decisions. 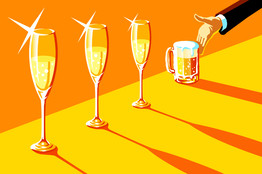 The proposal is an outgrowth of "Nudge," the brilliant book published last year by two University of Chicago scholars, economist Richard H. Thaler and law professor Cass R. Sunstein. A longtime friend of President Obama, Prof. Sunstein has been nominated to head the White House's Office of Information and Regulatory Affairs, a job often described as "the regulation czar."

In my view, a behavioral approach is decades overdue. Financial regulations always have been written mainly by lawyers and legislators — then promptly shot full of holes by promoters who understand how real human beings think and behave.

Lawyers think that the mere disclosure of risks and conflicts of interest provides the information that investors or consumers need. That is a fantasy. Faced with 47 pages' worth of "Risk Factors," investors come away with a warm glow of safety; risks that seem hard to understand appear unlikely to happen, and people who provide you with lots of detail seem likely to be honest.

To inform anyone, information has to be accessible. The central idea in "Nudge" is what Profs. Thaler and Sunstein call "choice architecture" — the context, format and framing of how decisions are presented to consumers. You will eat more nuts from a big bowl than from a small bowl. You will choose surgery if you are told it offers a 90% chance of survival; you will reject it if you are told there is a 10% chance it will kill you. The same people who would skip investing in a 401(k) if they had to "opt in" to the plan will participate if they have to "opt out" in order to skip it.

Prof. Sunstein, who is awaiting Senate confirmation in his post, declined to be interviewed. Cautioning that he can't speak for the Obama administration or Prof. Sunstein, Prof. Thaler discussed the new regulatory model. "The standard beer can is 12 ounces," he said. "That makes it pretty easy to compare beer prices. So now consider mortgages. It's not that you regulate the interest rates or the fees. But one way to make shopping easier is to make comparing the products simpler."

Thus, suggested Prof. Thaler, every bank or mortgage broker would have to offer two "safe-harbor" products with "standard terms that are easy to understand": a 30-year fixed mortgage with no points or prepayment penalties, and a five-year adjustable-rate mortgage. The market would set the interest rates. "By having these generic, simple mortgages," said Prof. Thaler, "you make everything else comparable."

Banks and mortgage brokers would remain free to offer more complex kinds of loans. However, added Prof. Thaler, "If the broker sells you a teaser-rate mortgage that you can't possibly afford once it resets, then as Ricky Ricardo used to say, he's got some 'splainin' to do" — including greater potential penalties from regulators. Mutual funds, 401(k)s and brokerage accounts wouldn't be regulated by the new agency but might well be influenced by its rules.

The proposal is about making regulation intelligent, not intrusive, said Eric Johnson, an expert on decision-making who teaches at Columbia Business School. "If you really do want a complicated, high-cost, high-risk mutual fund, you'll still be able to get it. But making sure that at least one option is not a disaster gives people an anchor."

Regulation that recognizes the limits of human rationality is an idea whose time has come. Like any good psychology lab, the proposed new agency will gather reams of data on how real people actually behave and adjust its rules accordingly, in real time. Of course, the financial industry will adjust its own behavior, trying to outsmart the new rules as fast as they are printed. But the war between the regulators and the regulated might finally be based on a realistic view of human nature, not fantasy.