Home » Uncategorized » Where is housing headed?

Where is housing headed?

During this past week, we’ve had some really positive news on the housing market.

Sales of existing homes rose last month for the third consecutive time, while sales of new homes rose in June by the largest percentage in eight years. Better yet, the Case-Shiller housing price index rose 0.5%, the first month-over-month increase in the index in 34 months (dating all the way back to July 2006).

The increase of Case-Shiller price index is especially important, because it seemed to signal the housing price has turned the corner (see graph below). No wonder everybody is saying the housing has hit the bottom! 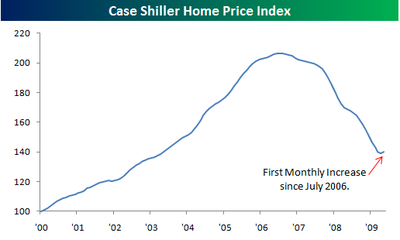 A closer look at the data makes me pause —We may have seen the worst, but the housing market correction is far from over.

First, most mass media have chosen not to mention the price increase was largely due to seasonality. The folks at CaculatedRisk have done a great job demonstrating such seasonal effect.

As shown in the graph below (click to enlarge), house buying clearly exhibits a seasonal pattern: the spring season is the busiest, especially from March to May, then the buying activities gradually die down in the 2nd half the year. 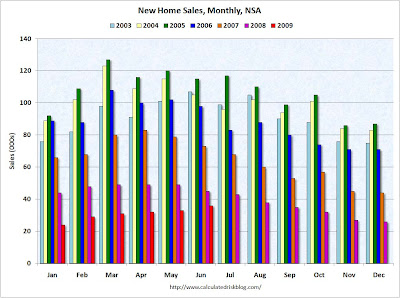 Since Case-Shiller price index is a 3-month moving average, so the recent May price index is an average of previous 3 months, from March through May, which also happen to be the busiest months.

In the following graph, the price index is shown in terms of percentage change of month-over-month. The seasonal pattern again is very obvious. In the spring, we always see a peak of the price, then the trend sharply reverses. Watch, for example, how the trend had reversed in the second half of 2008. 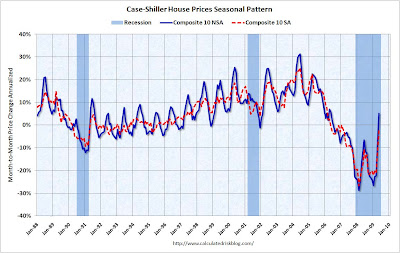 What to take away is that even the recent price increase is the first since 2006, it won’t be surprising if we find the price starts to decline again later in 2009. In fact, if you compare the May price with the price of the same month a year ago (in 2008), the index was actually down 17.1%.

Secondly, down to the micro level, the recent buying activities and the gradual warm-up of the price were the result of aggressive government interventions. The real correction may still come later. The Fed has been buying mortgage backed securities and ten-year treasuries, successfully pushing down mortgage rates to the historical low; And Obama government is sending out $8,000 checks to the first-time home buyers, providing them with great buying incentives.

However, most of the buying activities happened in the lower-end of the market and a lot of young buyers rushed into the market just to take the advantage of incentive measures, afraid of losing this “golden opportunity” in a lifetime, without considering their current income and affordability.

Some of these buyers are making the same mistakes that buyers had made before the housing bubble burst: they often leverage too much into the housing and continue to believe housing market will come back soon and expect to make a profit out of home value appreciation.

Finally, let me put the current housing bubble and correction into historical perspective, and explain why I think the housing correction is far from over.

The graph below shows how far speculators and frenzy buyers had pushed house prices since early 2000s: from level of 100 (normalized at year 2000) to over 225, then the bubble burst. The current level stands at 150, back to the mid 2003 level, but it is still way too high by historical standards: 50% above pre-bubble level in 2000, and almost doubles the average level of 75 over the preceding two decades. 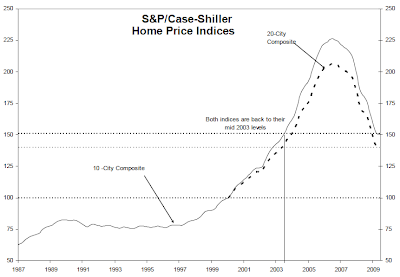 The first graph shows now it takes home builders almost 12 months to find buyers. The average length was only five months, before the housing bubble burst. 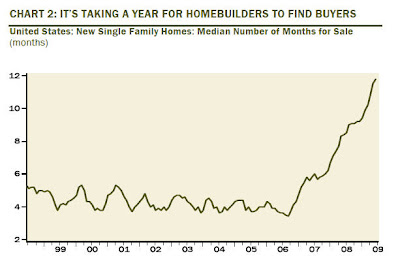 The second graph shows although housing inventory was down, it still remains at historical high level, both for existing homes and new homes. 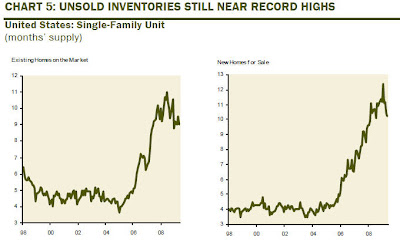 And boy, there are still too many houses waiting to be sold: 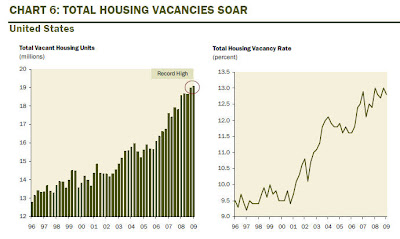 The last graph shows American home-ownership is in a process of mean-reverting. Some people got lured into buying houses they never could afford, and now they are paying the price. 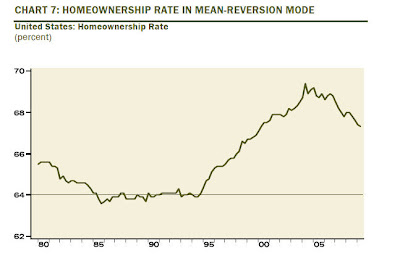 ← Chimerica: Where is China-US relation headed? Can country prosper without manufacturing? →