Chimerica: Where is China-US relation headed?

Niall Ferguson coined the term Chimerica (China-America), and he analogizes the relationship between China and the US as a marriage on the brink between a frugal husband (China) and a spendthrift wife (US).

In the following stimulating discussion (part of Aspen Ideas Festival Series) on where this Chimerica relationship is headed, Niall Ferguson thinks such relationship is not sustainable and the US and China are on a collision course, just like the rivalry between Britain and Germany in the early 20th century. With China’s sheer size and being non-democratic, you would naturally think so.

Jim Fallows disagrees. With many years of on-the-ground experiences in China, he thinks the US and China relation is more like US-Britain, and China’s ambition to revive its previous glory as the world power does not necessarily lead to clashes between the two.

I would highly recommend this piece. And I would like to briefly share my thoughts: 1) A rising China is unavoidable and unstoppable; 2) Competition between countries is healthy, and it often spurs innovation and technological break-through; 3) The US needs to be fully prepared for a rising China and strategically position itself in the 21st century. In particular, the US should have a strategy in steering China into a democratic country, remaking a potential adversary into a strong ally. 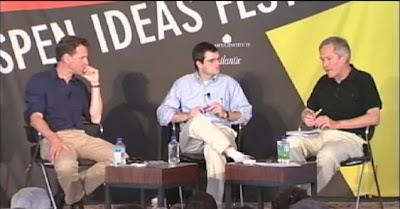 (click on the graph to play the video;
skip the intro part and go directly to 4:30).