With China's stock market up 97% this year, hot money is pouring in, reports WSJ:

Hot money is again flowing into China, and that could put Beijing in a quandary. Should the torrent continue, it could complicate policy makers' efforts to battle inflation. Should it reverse, property and stock prices will be hit hard.

There isn't an easy solution to this, nor does Beijing have much control over the situation. Hot money, or the speculative inflows that aren't explained by direct investment or trade, finds its way around China's tight grip on capital flows.

Its return became evident when Beijing reported last month that foreign-exchange reserves rose $178 billion, the most ever, in the second quarter. Analysts at UOB Group estimate that as much as $83 billion of this could be hot money, much of that flowing into stock and property markets and contributing to forming bubbles in both. The Shanghai Composite is up 97% so far this year. 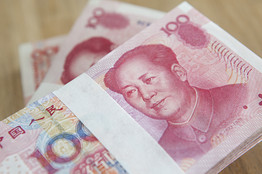 Gains in the value of the yuan could be substantial over the long term.

Two factors could keep the funds flowing in: expectations that Beijing will soon begin to raise interest rates, and a sense that, after being halted for a year, the revaluation of the yuan could resume. The yuan's revaluation has always been a motivation for hot-money investors.

Beijing could discourage the inflows by signaling that it won't live up to these expectations. A change in global sentiment would do the same: As investors retreated around the world in late 2008 and early 2009, some $173 billion of hot money flowed out of China, UOB estimates.