Time to rethink investment model in US college endowment?

Traditional view is that college endowment investment should focus on long term; short term ups and downs should not be major concern. But with most big college endowments down over 25% last year, question arises as to how to reconcile the long-term investment goal with short term liquidity problem: pay for student’s tuition, for example. (source: WSJ, 08/21/2009)

College endowments, reeling from their worst annual performance in decades, are questioning their faith in investments that fueled huge returns before backfiring last year.

The crisis of confidence has been playing out at the University of Chicago, in a previously unreported battle that divided the overseers of the nation’s 10th-largest university endowment, a committee that included hedge-fund managers Sanford “Sandy” Grossman and Cliff Asness. Amid last fall’s market turmoil, the committee argued over whether their portfolio’s assets, $6.6 billion in June 2008 but falling fast, were too risky and volatile. 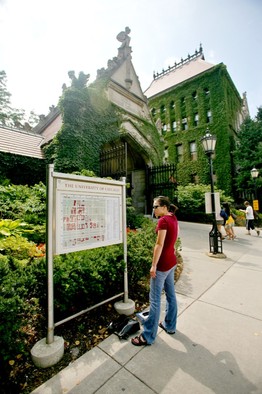 The endowment’s managers staged a $600 million share selloff to buy safer instruments, an unusually abrupt no-confidence vote in its portfolio model. In a late October email to committee members, Kathryn Gould, a venture capitalist who heads the college’s endowment committee, and Chief Investment Officer Peter Stein, wrote: “We will no doubt look like heroes AND idiots in the next couple of months.”

More such judgments will be passed beginning later this month, when colleges begin disclosing how their portfolios fared over the fiscal year that ended June 30. Northern Trust Corp. estimates that, over the period, the average U.S. college endowment has a 20% decline.

Though loath to discuss their money-management strategies, many universities appear to have considered moving to more conservative investments. Harvard tried last year to sell a chunk of its private-equity portfolio but didn’t receive an acceptable offer; it has been cashing out some of its hedge-fund investments, say people with knowledge of the situation.

Most college endowments used to favor stocks and bonds. David Swensen, hired in 1985 as Yale chief investment officer, argued that endowments — long-term investors that were unconcerned about redemptions or short-term market fluctuations — were ideal for the likes of real estate, leveraged buyouts and distressed debt. Yale beat markets by a wide margin.

But the stock market’s nosedive last year showed what some see as flaws in the model. “The endowment model contained a colossal intellectual error in thinking — that long-term investors don’t need short-term liquidity,” says Robert Jaeger of BNY Mellon Asset Management, a unit of Bank of New York Mellon, who advises endowments on how to structure their portfolios.

Some endowments maintain that, despite steep losses, they aren’t second-guessing themselves. “That would require moving away from equity-oriented investments that have served institutions with long time-horizons well,” Mr. Swensen said in an interview earlier this year.

In 2005, the University of Chicago hired Mr. Stein from Princeton, where he had worked under a protégé of Mr. Swensen. In June 2008, the university’s endowment had 77% of assets in “equity-like investments” — foreign and domestic stocks, private equity and hedge funds — according to the 2008 annual report.

That September, around the time that Lehman Brothers collapsed, members of the investment committee took a hard look at their mix.

“We had underestimated the value of liquidity and overestimated our degree of diversification,” said Andrew Alper, chairman of the university’s board of trustees and a committee member. He says the committee hoped to change the portfolio’s long-term exposure to risk and volatility, and would have preferred to unload its stakes in private-equity firms.

But with the market in these illiquid assets essentially frozen and hedge-fund redemptions coming slowly, they began to talk about selling stock.

In early October, the Dow tumbled 18% in one week. In an Oct. 28 email viewed by The Wall Street Journal, Ms. Gould and Mr. Stein told committee members they were considering “an outright sale” of $500 million in stocks — “virtually all the immediately saleable equities.”

By early November, according to people familiar with the matter, Ms. Gould had instructed Mr. Stein to sell $200 million of equities.

James Crown, a trustee and a general partner at Henry Crown & Co., a Chicago investment firm, expressed confusion. “Where are we going with the endowment and why?” he wrote to committee members in a Nov. 2 email viewed by the Journal.

A force behind the sales push was Mr. Grossman, a Greenwich, Conn., hedge-fund manager and economist, say those familiar with the situation. On Nov. 6, during a three-hour committee meeting at university’s business school, Mr. Grossman sketched out formulas on an easel to explain the portfolio’s relationship to market risk. Other times he referred to the 2008 returns at his own hedge fund, QFS Asset Management — some were ahead double-digits that year — to make a case for selling, these people say.

They say some of Mr. Grossman’s points were challenged by Martin Leibowitz, a managing director at Morgan Stanley, and by top trustee Mr. Alper.

Mr. Grossman says he advocated reducing risk and volatility but doesn’t remember whether he pushed to sell stocks.

The night of the committee meeting, Ms. Gould wrote several members that Mr. Stein was preparing to sell $300 million in stocks. A sale of another $100 million followed. Some proceeds went into fixed-income funds.

Mr. Asness, co-founder of Greenwich, Conn., hedge-fund firm AQR Capital Management, expressed dismay at the response to Mr. Grossman’s presentation. “Was Sandy that convincing?” he wrote in an email the next day. “I felt a consensus was building not to be so short-term.”

University of Chicago officials won’t say when they sold their stock, so it is impossible to calculate returns. Mr. Alper says the proceeds weren’t invested into other stocks but that the endowment continues to hold equities.

Fallout continues. “We cannot time the market to this degree and should not be trying,” Mr. Asness wrote in a January email to members of the committee.

Last year, the university changed its policy so only trustees could serve on its investment committee. That led three nontrustee members, including Messrs. Asness and Leibowitz, to step down in June.

Endowment CIO Mr. Stein announced his resignation in January. Mr. Stein said in a statement at the time that he left for family reasons.