Why college towns are recession-resistant?

I always like living in a college town, not only it exposes me to the intellectual environment, but also I get to play sports with a lot of energetic students. Now WSJ reports the college towns are also recession proof. Good news.

Why College Towns Are Looking Smart

Looking for a job? Try a college town.

Morgantown, W.Va., home to West Virginia University, has one of the lowest unemployment rates in the U.S. — just 3.9% — and the university itself has about 260 job openings, from nurses to professors to programmers. 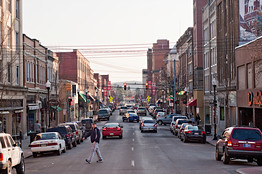 Of the six metropolitan areas with unemployment below 4% as of January, three of them are considered college towns. One is Morgantown. The other two are Logan, Utah, home of Utah State University, and Ames, Iowa, home of Iowa State University. Both have just 3.8% unemployment, based on Labor Department figures that are not seasonally adjusted.

The pattern holds true for many other big college towns, such as Gainesville, Fla., Ann Arbor, Mich., Manhattan, Kan., and Boulder, Colo. In stark contrast, the unadjusted national unemployment rate is 8.5%.

While college towns have long been considered recession-resistant, their ability to avoid the depths of the financial crisis shaking the rest of the nation is noteworthy. The ones faring the best right now are not only major education centers; they also are regional health-care hubs that draw people into the city and benefit from a stable, educated, highly skilled work force.

The big question hanging over these communities is whether their formula for success can outlast the nation’s nastiest recession in at least a quarter-century. Amid investment losses and state budget woes, many college cities are starting to see their unemployment rates rise, even though they’re still lower than the national average. The longer the recession drags on, the more likely college towns are to catch up with their harder-hit peers.

They already have felt the impact of the recession. WVU saw its endowment fall by nearly a quarter in the second half of 2008, and its hospitals are reducing 401(k) matching contributions and delaying $20 million in capital spending, though its state funding has remained intact.

Utah State University has seen nearly 10% of its state funding cut in the past six months, and in response has laid off about 20 employees and imposed a mandatory weeklong furlough for its employees during spring break to save costs. Iowa State, facing a 9% reduction in state appropriations, just received approval to begin an early-retirement program.

But for now, at least, job seekers who act quickly — and are willing to relocate — could well fare better in places like Morgantown, which is about 70 miles south of Pittsburgh near the Pennsylvania border. College towns like Morgantown have a distinct advantage over many other cities: They enjoy a constant stream of graduates, some who stay put and others who return years later — and each year brings a new crop of students and potential residents to the area.

“I could go almost anywhere and get a job right now,” says Shane Cruse, a senior in the WVU school of nursing who graduates in May, citing the shortage of nurses nationwide. But come June 1, he’ll be starting as a registered nurse at WVU’s Ruby Memorial Hospital.

“I love it here,” Mr. Cruse says. “It’s a large-enough city that there’s plenty to do. But you still leave your house and feel like it’s your hometown.”

WVU has a current enrollment of nearly 29,000, about the same size as the city of Morgantown, though the metro population is now about 115,000 and draws thousands more daily from the surrounding region for health care, shopping and WVU athletic events.

Today, the university and its hospital system together employ nearly 12,500 people — the largest employer in the whole state. Job growth in the Morgantown metropolitan area averaged 3.2% a year from 2002-07, according to the university’s Bureau of Business and Economic Research, compared to growth of just 1.1% nationally and 0.7% in West Virginia. The university system in total has an estimated annual economic impact of about $3.9 billion statewide.

Economists credit a highly skilled work force for the resilience of college towns. Edward Glaeser, an economics professor at Harvard University, has demonstrated that as the share of the adult population with college degrees in a city increases by 10%, wages correspondingly rise by about 7.8%.

“Apart from weather, human capital has been the best long-run predictor of urban success in the last century,” Mr. Glaeser says.

Nikki Bowman, a 1992 graduate of WVU, is the kind of person economists have in mind when they speak of “human capital.” She spent years in the magazine industry in places like Chicago and Washington, D.C., before returning last year to start her own magazine, WV Living, which was launched in November.

“It was my dream to come back, and I knew I could make it work,” says Ms. Bowman, 37. “Part of why I wanted to be here was to pull from the journalism school and I have a lot of great interns as a result,” which helps keep her payroll costs down.

WVU graduate Lindsay Williams, 29, started work as a real-estate broker with Howard Hanna’s Morgantown office shortly after leaving WVU while waiting for her then-boyfriend — now her husband — to finish his degree. She now serves as president of the Morgantown Board of Realtors.

Another factor helping college towns: “communiversity,” the current term for partnerships between universities and their home cities, such as joint economic development projects. The trend also reflects a shift in education to increasingly emphasize out-of-classroom learning, such as internships and volunteer work, that by definition engages the community, according to Sal Rinella, president of the Society for College and University Planning in Los Angeles.

“We could actually call these town-gown partnerships a kind of new movement in American higher education,” he says. “In the last 20 years or so, the boundaries between the cities and the universities have really begun to crumble.”

Planning experts point to the successful relationships between the University of Pennsylvania and downtown Philadelphia, and Johns Hopkins University’s multimillion-dollar partnership with the East Baltimore Development Corp. But the college-town effect has its greatest impact in places like Morgantown.

The close relationship between Morgantown and WVU was partly borne out of desperation. In 1991, a young, reform-minded group including Ron Justice, who is now the mayor, was elected to the city council at a pivotal moment; the decades-long decline of railroad and heavy industry in Morgantown meant the city urgently needed to find a new engine of growth.

The council hired a city manager to oversee municipal finances, and began working more closely with the WVU administration in a joint effort to turn the town around. They started out small, with road-paving projects and public safety. In 2001, the university relocated a major new administration building in the city’s blighted Wharf District instead of its downtown campus.

The new building became a catalyst for redevelopment of the whole waterfront. A new hotel, restaurants and a $28 million event center have since been built, and the old railroad tracks are now miles of jogging and biking trails.

The university has continued to upgrade its downtown campus and added new facilities like a $34 million student recreation center with two pools, a climbing wall and a café to its campus a few miles north of town. Construction is now under way on an 88-acre research park near the hospital and a $50 million commercial development featuring a Hilton Garden Inn.

At the same time, WVU president David Hardesty’s aggressive expansion of the university’s student body — which has grown 50% since 1995 — and program offerings in the 1990s, including a world-renowned forensics and biometrics program, helped raise the caliber of the city’s work force.

Jason Donahue graduated from WVU in 1993 and followed a career in commercial real-estate development to a job with ECDC Realty in Charleston, S.C., whose primary business is site selection and development for Wal-Mart Stores Inc. He moved back to Morgantown in 2007 to handle development in the Pennsylvania region. “My wife would tell you I picked our house so we could be within walking distance to the football games,” he said with a chuckle. They are now season-ticket holders.

His wife, a registered nurse, quickly found work at one of the city’s senior centers. Their 7-year-old daughter was in a community play last weekend sponsored by WVU — a production of “Alice in Wonderland.” “She was Gardener No. 7 with two speaking lines, and she did great,” Mr. Donahue says.