How the crash will reshape America?

How the crash will reshape America?  by Richard Florida  (source: Atlantic)

Falls in the value of financial assets worldwide might have reached more than $50,000bn, equivalent to a year’s global economic output, the Asian Development Bank will warn on Monday.

Asia has been hit disproportionately hard, the bank will say, in a report that warns of many Asian stimulus plans lagging behind those of the leading global economies.

Separately, the World Bank said on Sunday that developing countries faced a financing gap of between $270bn and $700bn a year as capital flows dried up, with only a quarter of vulnerable countries able to cushion the blow of the economic downturn.

The ADB report estimates capital losses last year in Asia, excluding Japan, at $9,625bn, or 109 per cent of gross domestic product, compared with a global average of 80-85 per cent of GDP. For Latin America, the study estimates 2008 losses at $2,119bn, or 57 per cent of GDP.

“Even as Asia and Latin America have diversified their investment and trading partners, the effect of the slowdown on exports, finance and investment is earthshaking,” the report warns.

The ADB’s estimates take into account falling stock market valuations and losses in the value of bonds supported by mortgages and other assets, though not financial derivatives. About a fifth of the losses in dollar terms arise from the depreciation of many currencies against the US dollar.

The World Bank report said $2,500bn-$3,000bn in public and private debt in emerging markets needed to be rolled over in 2009, most of it denominated in foreign currencies. This would put pressure on developing country governments, many of which had inadequate reserves to help their banks and companies refinance, the bank said.

Although the bank itself and other official institutions such as the International Monetary Fund have been increasing their lending, even at the lower end of the $270bn-$700bn range “existing resources of international financial institutions would appear inadequate to meet financing needs this year”, it said.

The ADB study, to be presented on Monday by Haruhiko Kuroda, president, was commissioned from Centennial Group, a consultancy company.

Mr Kuroda says: “I am afraid things may get worse before they get better. However, I remain confident that Asia will be one of the first regions to emerge from it, and it will emerge stronger than ever before.”

Hedge funds are piling into gold: 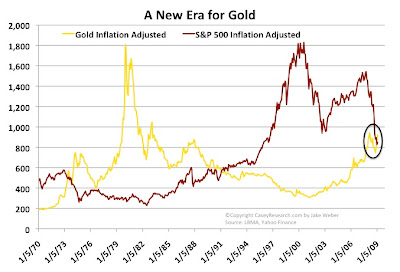