In 2009, all investments in China will come from government, at least from the most recent World Bank China Quarterly report. 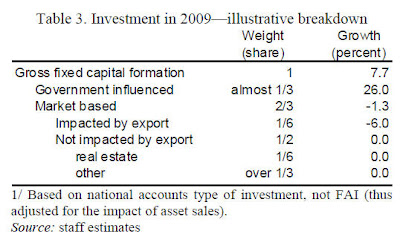 China is concerned about the dollar, but what can she do? Reports from WSJ. (by the way, Geithner should really be let go; he is not qualified for the job).

In January, the Treasury Secretary offended Beijing with accusations of currency manipulation. Wednesday, he prompted a brief dollar selloff by failing to dismiss radical proposals from the governor of China’s central bank promoting the creation of a new global reserve currency. Mr. Geithner later clarified his remarks, emphasizing his continued fandom of the greenback.

Fittingly, therefore, rhetoric was met with rhetoric. Reserve currencies are begotten, not made. The dollar’s pre-eminence, like sterling’s before it, stems from a range of factors including deep capital markets and military power. A replacement cooked up by finance ministers would be the monetary equivalent of Esperanto – an artificial curio.

China’s options look limited, however. U.S. Treasurys constitute arguably the only market deep enough for China to invest its surpluses without creating huge distortion or unleashing rampant protectionism. Dumping Treasurys to punish Washington would trash the value of Beijing’s own reserves — and cause upheaval in the U.S., still the buyer of last resort for the goods churned out in the factories that employ China’s workers.

Faced with such symbiosis, it’s understandable that Beijing keep jawboning Washington to show some fiscal restraint, even if the response is less than concrete.

Link to the full program at PBS