WSJ analyzes the relative attractiveness of investing in gold vs. gold miners.

Now that the Federal Reserve has pulled the tarpaulin off its shiny new printing press, gold has jumped again.

Not all investors stash coins or buy shares in bullion-backed exchange-traded funds. Others, such as hedge-fund manager John Paulson, just take a stake in a miner, AngloGold Ashanti Ltd. in his case. Which is better? 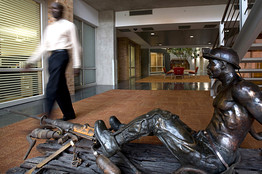 An employee walks through the headquarters of AngloGold Ashanti Ltd., in Newtown, Johannesburg, South Africa.

In the past five years, it made more sense to buy the type of gold that hurts if it falls on your head: Spot metal more than doubled in price while global gold-mining stocks rose just over one-third. That is odd. Consider, for example, a company producing gold at a cost of $400 an ounce. The price doubles from $500 to $1,000. Even if costs rise 50%, unit profit should quadruple, and the share price should soar.

In part, gold-mining stocks suffered as investors broadened their appetite for all commodities. ETFs have also cannibalized investors' cash, although the impact may be overstated. The collective value of the largest gold ETFs is about $47 billion, according to the World Gold Council. That is equivalent to 30% of the market capitalization of the NYSE Arca Gold Miners Index. Actual inflows over time to ETFs, however, would have been at lower prices than today.

Meanwhile, gold's popularity stems mainly from fears of inflation and financial meltdown. The former should, eventually, erode miners' margins. Malfunctioning credit markets hamper project financing. That tarnishes one advantage miners have over gold: They can expand through exploration, while the metal itself pays no dividends and doesn't breed.

Similar to the Fed, the sector also likes to print paper. Stock issuance by gold miners jumped in 2006 and 2007 alongside the gold price, raising three times the amount of the prior two years, according to data provider Dealogic. This year, the sector has tapped investors for $5 billion already, almost as much as all of 2008.

Victor Flores, analyst at HSBC, suspects that has fueled industry cost inflation. He estimates the industry's fully loaded 2008 cost, including such items as exploration expense, was $849 an ounce, barely below the average gold price of $871.

HSBC pegs this year's cost at $749, suggesting good profit growth and stock performance in the near term, especially as the sector was hit in last year's market crisis.

As with any stock, however, investors still favoring gold miners over the metal should pick carefully. Low-cost producers in resource-rich areas are best. And, ideally, they should have other levers to pull to increase value.

AngloGold is based in South Africa and enjoys among the lowest unit costs in the industry. Unwinding its large gold-hedging book should give it better leverage to rising prices for its output. As a sector heavyweight, it is well-positioned for any consolidation opportunities. Looks like Mr. Paulson might be onto something.

Does the Fed have an exit strategy?

Whether 70-style high inflation is inevitable:

US-China relationship in the time of crisis: