Following my previous post on housing market, the future market seems to predict house price will bottom out in late 2009.

How China helped create the macroeconomic backdrop for financial crisis

Over the past decade, China and other emerging markets accumulated foreign currency reserves to insure against the economic and political vagaries of financial globalisation. They were wise to do so. Countries with larger reserves are weathering the storm relatively better than those who have bought less insurance.

Although purchasing insurance policy might have been sensible from the perspective of each country, collectively these currency interventions prepared the ground for the global crisis. Emerging markets, most notably China, helped to create the macroeconomic backdrop for the current financial crisis by subsidising interest rates and consumption in the US. Niall Ferguson and I coined the term “Chimerica” to describe this historically unique financial symbiosis that had developed between China and America.

Financial globalisation 2.0 started in the 1980s and lasted to 1997-1998. It was based on the idea that removing restrictions on capital account transactions would enable emerging markets to tap into the pool of global savings and import much-needed capital for development. Financial globalisation 2.0 ended painfully with the Asian crisis when it became clear that private capital flows were volatile and could seriously complicate economic management in difficult times.

What followed was financial globalisation 3.0. Emerging markets heeded Martin Feldstein’s advice and took out an insurance policy against the vagaries of financial globalisation. By running current account surpluses, intervening in foreign exchange markets and building up currency reserves, Asian and other emerging economies were sustaining export led growth and buying insurance against future financial instability.

These policies turned developing markets into net capital exporters to the developed world, mainly to the US. Between 1990 and 1998, during what I have termed financial globalisation 2.0, emerging and developing economies (according to the International Monetary Fund classification) were running an average current account deficit of about 1.7 per cent of their gross domestic product. Between 1999 and 2008,  during financial globalisation 3.0, this deficit turned into a surplus of 2.5 per cent of GDP.

Just like its predecessor, financial globalisation 3.0 seemed a success story for a while, generating financial stability and high rates of economic growth. Yet the accumulation of large war chests of foreign reserves through currency intervention carried negative externalities.

The arrangement opened a Pandora’s Box of financial distortions that eventually came to haunt the global economy. The glut of savings from emerging markets has been a key factor in the decline in US and global real-long term interest rates, despite the parallel decline in US savings.

Lower interest rates in turn have enabled American households to increase consumption levels and worsened the imbalance between savings and investment. And because foreign savings were predominantly channeled through government (or central bank) hands into safe assets such as treasuries, private investors turned elsewhere to look for higher yields. This led to a repricing of financial risks and unleashed the ingenuity of financial engineers who developed new financial products for the low interest rate world, such as securitised debt instruments.

This is not to say that reserve accumulation was the only cause for the current crisis. Yet the core issue remained the Chinese willingness to fund America’s consumption and borrowing habit. Without this support, interest rates in the US would almost certainly have been substantially higher, acting as a circuit breaker for the developing debt-consumption bubble.

Beijing and others cannot be blamed for reckless lending into the housing bubble or leverage in western financial institutions, but it is clear that a vast amount of capital was flowing from a developing country with a per capita income of one tenth of the western world to one of the richest economies in the world. Water was flowing uphill in unprecedented amounts.

Individual policies meant to insure against financial instability and sustain export-led growth have collectively distorted global interest rates, helped to sustain excess demand and contributed to the mispricing of financial risks. Moreover, it is unlikely that emerging markets’ behaviour will change.

From the perspective of emerging markets, the academic debate as to whether reserve levels have grown excessive has been answered almost overnight in the current crisis.  It is clear to policy makers from Buenos Aires to Budapest and Beijing that one can’t have too many reserves in a world of volatile capital flows. Emerging markets are as unlikely today as they were during the past decade to embrace the instability of global capital flows and accept large swings in exchange rates.

Moreover, the past years have shown that capital outflows from emerging markets, including China’s reserves accumulation within the constellation we called Chimerica, have themselves contributed to the build-up of macroeconomic imbalances and financial risks that brought the global economy to its knees.

After the dust has settled, members of the economics profession will have to think hard about what the right policy advice drawn from financial globalisations 2.0 and 3.0 should be. Neither model has passed the practice test with flying colours.

Jim Rogers bombarded Obama and the Fed for bailing out banks. His advice: ” Go become a farmer”, a.k.a, investing in agriculturals.

Paul Krugman thinks we are pretty much in the dark, i.e., there are NO rules policy makers can follow in this crisis.

1. Interest rate is down to almost zero, and monetary policy lost its effectiveness. 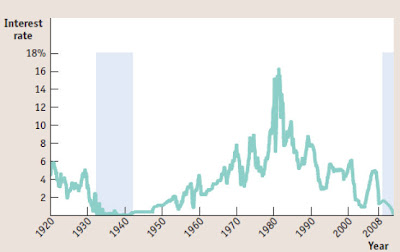 2. The Fed has been pumping money/credit like crazy, but credit market and lending are still pretty much stuck, with money multiplier sharp falling. 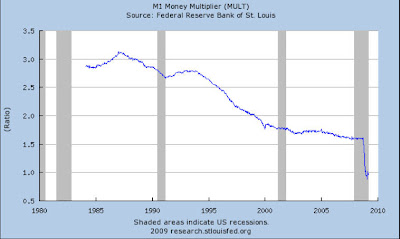