Will banks sell their toxic assets?

Treasury Secretary Timothy Geithner’s latest plan to rescue U.S. banks has been widely welcomed by the markets as a potential savior of the global financial system. They may be right — but not for the reasons they suppose.

To be successful, banks and potential investors need to agree on a price for toxic assets. That’s a tall order. Banks that haven’t marked their exposures to market won’t want to sell assets at prices that would force them to take big losses. And banks that have marked their exposures to market aren’t likely to want to sell either – particularly if they believe the assets are performing well and likely to show future gains.

Take HSBC, which holds $33.1 billion of bonds backed by assets like U.S. residential mortgages, commercial mortgages and student loans. At the end of 2008, the market value of those assets was just $20.3 billion, yet the bank took just $279 million of impairments last year through the income statement. Under a severe stress scenario, HSBC expects impairments of $2.5 billion over the life of the assets.

An investor who paid the market price for those assets would, on HSBC’s forecasts, make an unleveraged 50% return if held to maturity. Add in the generous leverage terms on offer from the Fed, and the returns would be over 100%.

Of course, banks won’t want to sell at prices that give investors returns like that. Granted, the financing provided by the Geithner plan could boost prices by removing some of the illiquidity discount on the toxic assets. But that may not be enough to offset the fear among investors that losses on the assets will keep rising if the economy stays in the doldrums.

Does that mean the plan is doomed to failure? Not necessarily. Its most useful service may yet be to establish more bid prices for toxic exposures, paving the way for more realistic marking of assets, even if they aren’t ultimately sold. True, some banks will protest to regulators that the bids are unrealistically low. But the authorities may not listen if the bids reflect values they’ve arrived at as a result of the stress tests currently being conducted on bank balance sheets.

True, sharply lower asset values could imply insolvency for some banks. The Treasury would then have to decide whether to seize such a bank or keep it alive with government equity injections.

Seizure is fraught with headaches, but at least there would be a ready body of private sector bidders for bank assets.

Paul Krugman thinks the plan is the same as the original Paulson plan. No fundamental change and it won’t work:

Pay attention to his words at the end that the Fed will inflate the $ to get out of this crisis. This is another reason to buy gold, and commodities in general.

A nation on debt

Credit is good, but too much of it will have the opposite effect. This graph looks at the total credit as a percent of GDP from 1929 to 2008. 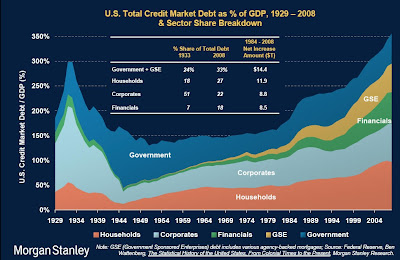