Brad DeLong of UC Berkeley writes on Economist Voice on the four ways out of depression:

BERKELEY — When an economy falls into a depression, governments can try four things to return employment to its normal level and production to its “potential” level. Call them fiscal policy, credit policy, monetary policy, and inflation.

Inflation is the most straightforward to explain: the government prints up lots of banknotes, and spends them. The extra cash in the economy raises prices. As prices rise, people don’t want to hold cash in their pockets or their bank accounts—its value is melting away every day—so they step up the pace at which they spend, trying to get their wealth out of depreciating cash and into real assets that are worth something. This spending pulls people out of unemployment and into jobs, and pushes capacity utilization up to normal and production up to “potential” levels.

But sane people would rather avoid inflation. It is a very dangerous expedient, one that undermines standards of value, renders economic calculation virtually impossible, and redistributes wealth at random. As  John Maynard Keynes put it, “there is no subtler, no surer means of overturning the existing basis of society than to debauch the currency. The process engages all the hidden forces of economic law on the side of destruction, and does it in a manner which not one man in a million is able to diagnose…” But governments will resort to inflation before they will allow another Great Depression—we just would very much rather not go there, if there is any alternative way to restore employment and production.

The standard way to fight incipient depressions is through monetary policy. When employment and output threaten to decline,
the central bank buys up government bonds for immediate cash, thus shortening the duration of the safe assets that investors hold. With fewer safe, money-yielding assets in the financial market, the price of safe wealth rises. This makes it more worthwhile for businesses to invest in expanding their capacity, thus trading away cash they could distribute to their shareholders today for a better market position that will allow them to reward their shareholders in the future. This boost in future-oriented spending
today pulls people out of unemployment and pushes up capacity utilization.

The problem with monetary policy is that, in responding to today’s crisis, the world’s central banks have bought so many safe government bonds for so much cash that the price of safe wealth in the near future is absolutely flat—the nominal interest rate on government securities is zero. Monetary policy cannot make safe wealth in the future any more valuable. And this is too bad, for if we could prevent a depression with monetary policy alone, we would do so, as it is the policy tool for macroeconomic stabilization that we know best and that carries the least risk of disruptive side effects.

The third tool is credit policy. We would like to boost spending immediately by getting businesses to invest not only in projects that trade safe cash now for safe profits in the future, but also in those that are risky or uncertain. But few businesses are currently able to raise money to do so.

Risky projects are at a steep discount today, because the private-sector financial market’s risk tolerance has collapsed. No one is willing to buy assets and take on additional uncertainty, because everyone fears that somebody else knows more than they do—namely, that anyone would be a fool to buy. Although the world’s central banks and finance ministries have been devising many ingenious and innovative policies to stimulate credit, so far they have not had much success.

This brings us to the fourth tool: fiscal policy. Have the government borrow and spend, thereby pulling people out of unemployment and pushing up capacity utilization to normal levels. There are drawbacks: the subsequent deadweight loss of financing all the extra government debt that has been incurred, and the fear that too rapid a run-up in debt may discourage private investors from building physical assets, which form the tax base for the future governments that will have to amortize the extra debt.

But when you have only two tools left, neither of which is perfect for the job, the rational thing is to try both—credit policy and fiscal policy—at the same time. That is what the Obama administration is attempting to do right now.

Top 20 financials: then and now 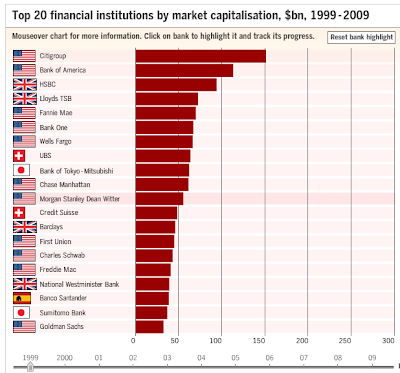 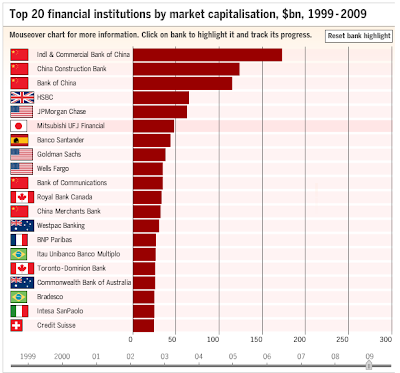 What’s your career "Plan B"?

Listen to the conversation from our own Boston host Tom Ashbrook. (source: NPR)

This G20 Meeting is going to be interesting

If the G20 meeting were to be disrupted just like what happened in Seattle in 1999, what will happen to the world markets? But no matter what, don’t wear banker’s suits on London streets.

The world wants China to play a bigger role in funding IMF;  China, in return, wants more voting power from IMF, rightly so.

If IMF, an outdated organization out of the WWII, wants to reassert its prominence in international monetary policy making, then it should reform itself to reflect today's global economic structure and give more voting powers to emerging economies like China, India and Brazil.  This will happen.  The question is just when.

BEIJING — A hot-selling new book that excoriates the U.S. and calls for China to be more assertive is fueling debate among Chinese about nationalism and their country's role in the world.

"Unhappy China" is a collection of essays by five authors who argue that China has been too deferential to a Western world that is hostile toward it. They argue that China needs to use its growing power and economic resources to carve out its own position of pre-eminence. "From looking at the history of human civilization, we are most qualified to lead this world; Westerners should be second," the book says. 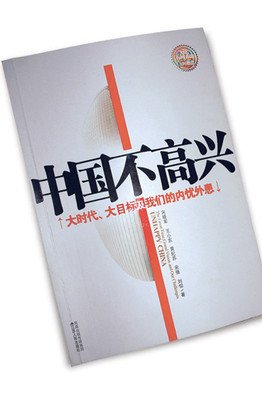 The authors, a group of scholars, single out the U.S. for special scorn, and say their book's message — aimed largely at younger Chinese — has been helped by the economic crisis. "This economic problem has shown the Chinese people that America does have problems, that what we've been saying is right," said Wang Xiaodong, in an interview Friday in Beijing with three of his co-authors: Liu Yang, Song Qiang and Huang Jisu. The fifth author is Song Xiaojun.

Since being released March 13, the book has sold out its initial shipments in many Chinese bookstores and landed on the best-seller list at leading online retailer Dangdang.com. The publisher has printed 270,000 copies, and says sales are far outpacing expectations.

Yet much of the response has been negative, reflecting the complex place that nationalism holds in today's China. Several reviews in the Chinese media have ridiculed "Unhappy China" as an attempt to cash in on nationalistic sentiment. The book is a way to "fish money from the pockets of the angry youth and angry elderly," wrote one critic in the China Youth Daily, a leading state-run newspaper.

An English-language article by Xinhua, the state-run news agency, said the book had failed to hit a chord with average Chinese, and quoted blistering critiques from bloggers and academics calling its nationalism embarrassing and unconstructive.

"Unhappy China" comes as the economic crisis has damaged the West and, in the minds of some Chinese, left China relatively strong.

In January, at the World Economic Forum in Davos, Premier Wen Jiabao blamed the U.S. for creating the economic crisis. Earlier this month, he expressed concern about China's holdings of U.S. government debt given questions over Washington's economic policies. Last week, Zhou Xiaochuan, China's central-bank governor, proposed adopting a global currency to replace the dollar as a world standard. But Chinese officials, like their Western counterparts, also have called for more international cooperation to help pull the global economy out of its slump.

The authors of "Unhappy China" reject such talk, reciting a litany of grievances against the U.S., from a monetary policy that threatens to devalue China's holdings of U.S. Treasurys to Washington's support for Taiwan.

Many of the prescriptions in "Unhappy China" echo positions China's government espouses — strengthening the country's reliance on domestic technology and innovation, and bolstering its military, for example.

The authors, however, reserve some of their greatest resentment for China's current political and economic leadership.

"I've already lost all hope in China's elite," says Mr. Wang. The authors see last year's angry protests by mainly young Chinese against foreign criticism of China's Tibet policies and its hosting of the Olympics as a "milestone" for relations with the West.

"America will face a less friendly China in the future," says Mr. Wang.

PPIP In A Nutshell

A crystal clear explanation of the PPIP (public-private investment program). The plan opens the door to further manipulations of the system and “moral hazard”. The success of the plan hinges on: whether banks’ problem is liquidity or insolvency. But the bottom line is taxpayer will end up paying for this mess. And no one will take responsibility?

(note: a small mistake in the video is FDIC not the Fed will lend the money).