Home » Uncategorized » Is China rising as a science superpower?

Is China rising as a science superpower?

By Paul Deng in Uncategorized on February 7, 2010.

Reports from Bank of Finland:

China rising as science superpower; huge growth in research activity. A Financial Times story on Monday (Jan. 25) compiled data from Thomson Reuters and Web Science database to show Chinese researchers published about 112,000 scientific articles in peer-reviewed journals in 2008. US researchers led the pack with the most published articles (333,000).

Among the BRIC countries, China has made the most impressive gains in research publications, with notable strengths in the areas of chemistry and materials science. The quality of the science in Chinese papers still is variable, but clearly the Chinese are increasingly working across borders with members of the international research community and a growing number of foreign researchers are publishing jointly with their Chinese colleagues. Generally speaking, the quality of Chinese research is improving.
Brazil has also made huge strides in increasing its out-put of scientific articles, with particular expertise shown in the areas of agriculture and bioscience. In contrast, India, and in particular Russia, failed to live up to expectations of increasing research prowess.

China’s heavy investment in education and R&D during the past decade is now coming to fruition with China joining other research leaders. The return of the Chinese re-searchers who have studied and worked in North America and Europe are playing an important role in China’s development. China has also been successful in translating basic science advances into commercial applications. This phenomenon is reflected, e.g. in the large increase in international patent applications.

China now produces the world's second most research publications, only behind the United States. 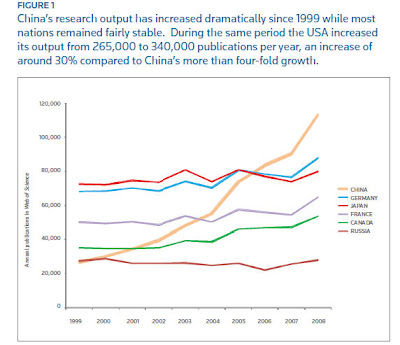 Where are China's research publications concentrated? 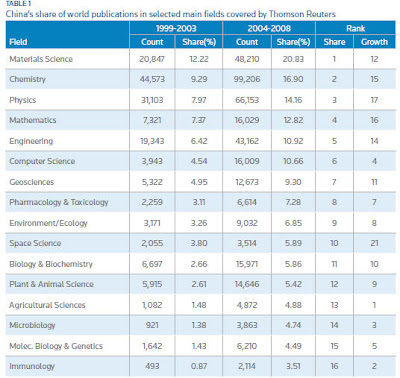